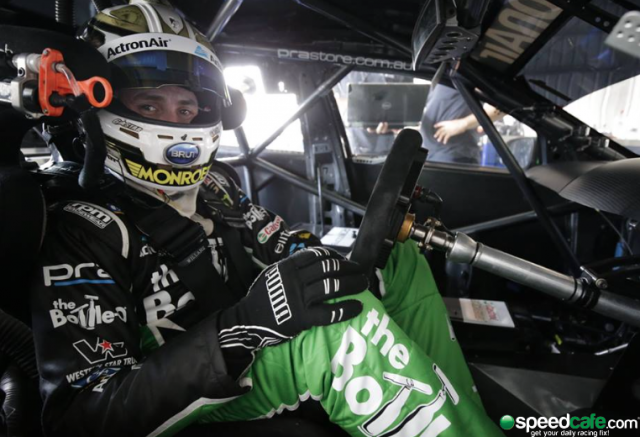 Mark Winterbottom is primed for his title defence

Mark Winterbottom is ‘confident but not cocky’ heading into the opening challenge of his V8 Supercars title defence this weekend.

The Prodrive ace will sport #1 on his Bottle-O Falcon heading into the season-opening Clipsal 500 on the Adelaide street circuit.

Having shaken the monkey off his back after 13 years in the category, the 34-year-old is determined not to relinquish his grip on the trophy this year.

Now armed with the knowledge of what it takes to win Australian motorsport’s premier series, Winterbottom heads into 2016 with new-found confidence, but is mindful that the challenge is no less significant.

“Regardless of what position you finish the year before, everyone is just trying to beat each other,” Winterbottom told Speedcafe.com.

“I know I have something on the car that everyone wants to peel off and put on their car next year.

“Once you got it you don’t want to lose it. People are not going to treat me any different.

“It (winning the championship) is a stat that can never be taken away from you, so regardless of what happens I have won a championship, which is pretty cool.

“I feel confident, not cocky. It is nice to come into a season having won compared to finishing third for seventh time or so.

“I feel motivated to race and it is good to be able to go out there and try and defend it.

Coupled with the momentum of winning last year’s championship, Winterbottom has enjoyed a positive pre-season which has left him convinced his car has moved a step forward over the off-season.

“Twelve months on it is a completely different car to what we started with last year,” added Winterbottom.

The V8 Supercars hit the track for opening practice on Friday.