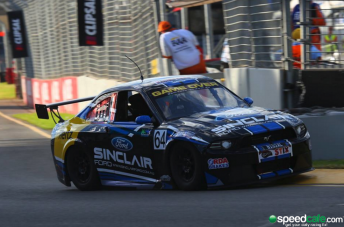 Craig Woods has taken out Aussie Racing Cars Race 1 while several others came to grief on the Adelaide streets.

Polesitter Trent Young was quickest off the line as Brendon Pingel and Woods swamped a slow-starting Kel Treseder.

Woods had the lead by the end of the opening lap, before a Lap 2 incident saw Adam Uebergang spin Kyle Clews after contact with Ben Walsh while battling for fifth.

While all three managed to continue, the Safety Car was soon called as a result of separate opening lap incidents which left Craig Thompson’s and Reece Chapman’s cars strewn at Turn 5.

The green flag ultimately flew for a single-lap dash to the finish, Woods taking the chequered flag over a second clear of Pingel, who profited from a clash between Treseder and James Duckworth.

Treseder had attempted to dive under Duckworth at Turn 11 but failed to clear car #10 and was dispatched into the tyre barrier.

Duckworth continued in third, ahead of Ben Walsh and Uebergang.

Sieders took a conservative approach to proceedings, placing ninth in the opening 12 minute stanza of the two-part knock-out qualifying format, before hacking 1.4s out of his best time when the top ten progressed to part two.

Kim Jane will share the front row after he also went quicker during the second 5-minute part of the session.

Craig Dontas held provisional pole before a nervous finish to part one when he brushed the wall at the high-speed Turn 8, but could not improve his time.

Robby Gordon dominated on the way to pole in the Stadium Super Trucks.

Dakar Rally winner Toby Price set the early pace before Gordon reeled off a succession of fast laps and eventually lowered the benchmark to a 1:45.38s time with six minutes remaining.

Sheldon Creed was next best for much of the piece before being bettered by Paul Morris as the chequered flag flew in the 20-minute session.

Matthew Brabham kicked off his year’s racing program, which will be highlighted by a run in the Indianapolis 500, by earning a fourth-placed starting berth, one position ahead of Price.

Burt Jenner produced the most spectacular moment of the session when he rolled at Turn 7 after running wide and bouncing off the tyre wall. The Ford Mustang of Glenn Seton emerged as the pacesetter in practice for the Touring Car Masters.

Seton saved his best until second practice when he posted a 1:29.5s which proved to 0.3s seconds quicker than reigning champion John Bowe, who is back behind the wheel of his Holden Torana.

After topping opening practice, Eddie Abelnica set the benchmark earlier in the session before ending the hit-out in third.

Touring Car Masters will return to action tomorrow with a 20-minute qualifying session before a 12-lap race scheduled for 0920.