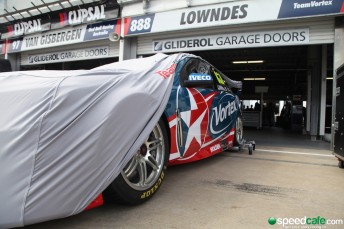 Triple Eight has experienced a setback ahead of the opening day of practice at the Clipsal 500 with Craig Lowndes’ TeamVortex crew chief forced to return to Brisbane.

Nick Petrons, who leads the crew on the newly created third Triple Eight entry, exited the Clipsal 500 paddock this afternoon after his wife went into labour.

Triple Eight is now trying to organise a mechanic to fly in to replace Petrons on the #888 Commodore.

“His wife has gone into labour a bit earlier than expected so he’s had to set off for the airport now,” team boss Roland Dane told Speedcafe.com of Petrons.

“It was probably two weeks earlier than had been predicted.

“We will have to roll someone else in for the rest of the weekend.

“We might have to lend them somebody from the Red Bull garage just for a pit stop but other than that we will try and bring a mechanic down from the factory for the weekend.

“These things happen (and) it’s for a good reason. If you can populate the world with a few little Petrons, you can do a lot worse than that.”

Triple Eight has seen its V8 Supercars squad mushroom to three cars this year with the TeamVortex car operated by team manager Andrew Simpson and engineered by the highly praised Ludo Lacroix.