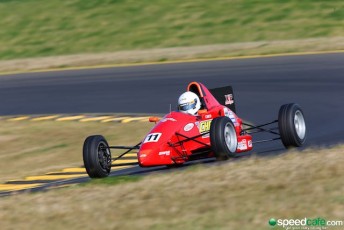 The reshaped Australian Formula Ford Series will continue to have an alliance with the Mazda Road to Indy ladder system after extending its association for a further two years.

A fresh deal was struck two years into a three-year term which now sees the partnership carry on until 2019.

Under the alliance, the winner of the Australian Formula Ford Series receives a test in a USF2000 machine along with financial help to compete in the first stage of the Mazda Road to Indy Series.

The national Formula Ford Series winner will be invited to compete in a USF2000 Scholarship Shootout where the winner collects $US200,000 ($AUD273,700).

“Our relationship with the Road to Indy program has added a lot of value to our competitors,” Formula Ford Association chairman John van Leeuwen said.

“Not only does the winner of the Australian Formula Ford Series receive one of the best prizes available to junior level drivers in Australia but provides a cost effective and well defined pathway to professional ranks.”

“There is no hiding that the kids that leave Australian shores have to pay to race in order to climb the ranks to be considered for professional drives which comes at considerable cost.”

Australians Jordan Lloyd and Anthony Martin will contest the USF2000 series in 2016.

Matthew Brabham took out the USF2000 in 2012 before going on to win the Pro Mazda Championship the following year.

The 22-year-old is set for his greatest career breakthrough by campaigning an Australian created Pirtek Team Murray Chevrolet in the two IndyCar races in May – the Angie’s List Grand Prix and the Indianapolis 500.