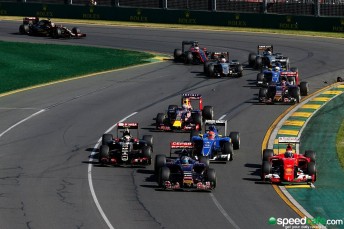 Drivers have spoken out against Formula 1’s plans to introduce a revised qualifying format which could debut at the Australian Grand Prix.

Teams agreed to a radical elimination style qualifying procedure last week which would see the slowest drivers knocked out at regular 90 second intervals.

The implementation of the format has already hit hurdles after Bernie Ecclestone claimed the sport will not have a timing system developed until the Spanish Grand Prix delaying its introduction.

Yesterday the FIA announced a tweaked version of the new qualifying format which would see eliminations take place in Q1 and Q2 only, while eight drivers do battle for pole in Q3.

Following the revelation, the FIA’s Charlie Whiting called a meeting with 13 drivers where concerns over the new qualifying system were aired, casting uncertainty surrounding its introduction.

Force India’s Sergio Perez revealed that the drivers were against the changes to qualifying and urged the FIA to amend the proposal.

“We’re not very happy with the rules they want to implement. Let’s see if they can change it.

“We feel the qualifying at the moment is really good. I don’t think there is a reason to change that.”

While the new procedure has been agreed in principal by F1 chiefs, it requires final sign-off by the World Motor Sport Council which meets at Geneva on Friday.