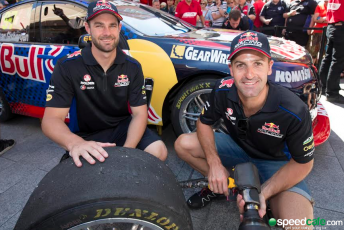 New Red Bull recruit Shane van Gisbergen has been given equal favourite status with six-time champion team-mate Jamie Whincup by bookmakers ahead of the Clipsal 500 Adelaide.

V8 Supercars’ official betting agency Ubet has both Van Gisbergen and Whincup at $4.00 favourites to win the season’s opening race, which will take place over 125km on Saturday.

Reigning champion Mark Winterbottom, who is yet to win a single race at the Clipsal 500, is third in the betting order to win Race 1 at $6.00 ahead of returning team-mate Chaz Mostert ($10.00).

Craig Lowndes ($10.00) completes a Triple Eight and Prodrive sweep of the top five places in the order.

Volvo’s Scott McLaughlin, who is winless in over 12 months, the Holden Racing Team’s James Courtney and new DJR Team Penske signing Fabian Coulthard are best of the rest at $12.00 each.