Waters must ‘step up everything’ in main game

Waters must ‘step up everything’ in main game 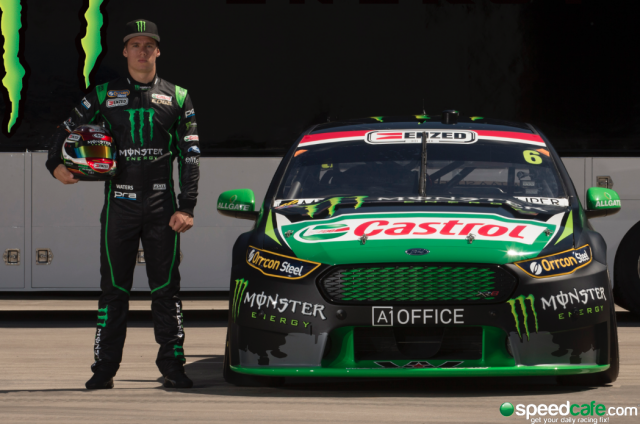 Reigning Dunlop Series winner Cameron Waters admits he must raise every aspect of his game to be competitive in his rookie V8 Supercars Championship season.

The 21-year-old was finally confirmed in Prodrive’s #6 Ford this morning alongside the reveal of backing from American drinks brand Monster Energy.

Last year saw a dominant Dunlop Series campaign with Prodrive, scoring 10 wins from 16 races and only once finishing outside the top three.

Late season fill-in drivers for Chaz Mostert on the Gold Coast and at Pukekohe underscored the gulf in competitiveness between the two series, however, as Waters was forced to fight hard for midfield positions.

Benefitting from the experience, Waters says he is under no illusions as to the enormity of the challenge this season.

“I obviously had a few good years in the Dunlop Series and last year filling in for Chaz helped me a lot giving me experience.

“The racing is a lot more intense. Obviously in the Dunlop Series there are two or three quick guys and in this series you have 25.

“That’s a big part of it, especially in qualifying. If you stuff up a little bit and drop two tenths it can be the difference between top 10 and 15th or 16th.

“I’ve just got to step up everything this year.”

A recent pre-season test at Winton allowed Waters to settle into his role and work alongside race engineer Brendan Hogan.

Hogan, who joined Prodrive from Lucas Dumbrell Motorsport over the off-season, had previously spent time with Waters at Kelly Racing in 2012.

“Brendan is really good and it was great to work with him again and just get through our program at the test,” said Waters.

“The test was great just to be in the car on a hot day for a long period of time and kind of simulate Clipsal.

“I’m really looking forward to working with Brendan and Frosty’s (Mark Winterbottom) side of the garage as well.

“We have a really good relationship (with Winterbottom) and I’m hoping to learn as much from him as I can.”

A native of Mildura in Victoria, Waters says he’ll have plenty of family support on hand in Adelaide this weekend as he aims for solid finishes.

“I grew up only four hours away from Adelaide so I’ve got a lot of family and friends around the Adelaide region,” he said.

“It’s really cool to be going into Adelaide with that behind me, but also I know that the main series is a lot harder as well.

“We’ll see how we go. I just want to get through the weekend clean and hopefully I can be in the top 10.”