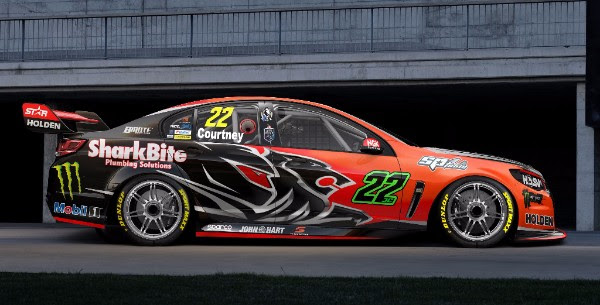 The Holden Racing Team has announced a new sponsor that will take a prominent place on the sides of its Commodores at the Clipsal 500 Adelaide.

SharkBite Plumbing Solutions will feature on the rear quarter panels of the two cars in place of HSV branding used with the livery’s initial launch.

The move follows the downsizing of former primary sponsor SP Tools, which is running as a major sponsor on both of Lucas Dumbrell Motorsport’s Holdens in Adelaide.

“We are delighted to welcome on board a new partner to our team and to V8 Supercars – SharkBite Plumbing Solutions and Reliance Worldwide Corporation,” said Holden Racing Team principal Adrian Burgess.

“A partnership such as this is a feather in our team’s cap and demonstrates the synergies V8 Supercars can produce for non-traditional, non-automotive brands.

“We are excited about our partnership with RWC and SharkBite and we look forward to working closely with them and their customers.”

The V8 Supercars hit the track for first practice in Adelaide on Friday.

Next Story Waters must 'step up everything' in main game