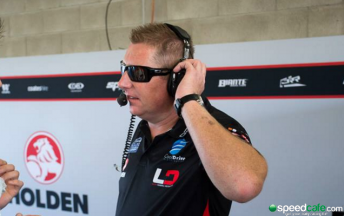 Hay has inherited the engineering role on Andre Heimgartner’s car after the team failed to secure a suitable replacement for Brendan Hogan, who moved to Prodrive in the off-season.

Taking a V8 Supercars title as a race engineer with the Stone Brothers in 2005, Hay was confined to workshop duties four years later when an air jack explosion at a test day left him with permanent inner ear damage.

Hay returned to trackside duties when he took up the management role at LDM last year, utilising specially designed noise-cancelling ear plugs in order to help manage his issues.

“It’s still a big struggle and something that I’ve got to work hard to manage, especially now that I’m back on a car as well,” Hay told Speedcafe.com.

“We had some dramas last year where I was flat in the truck and really unwell after a pop or bang from the cars at the wrong moment.

“Being back on the cans this weekend, we’re just hoping that I can hear everything that Andre says and it all goes smoothly.”

Hay engineered Heimgartner at the team’s recent pre-season test day and says the partnership could continue through the season.

“It’s one of those situations that because Andre’s deal was late (signed in early February), it makes it hard to attract engineers and crew,” Hay explained.

“The way we’re planning to structure our engineering department at the moment is that we want to get a couple of good data guys and I’ll come in and work with them on race days.

“But at the moment there’s nothing in concrete either way.” 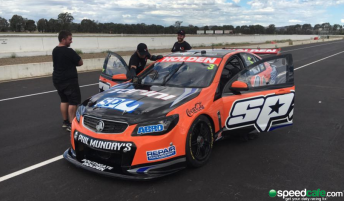 Taking pressure off Hay is the recruitment of former Triple Eight man Andy Atkins, who worked with LDM at Adelaide and Bathurst last year, as crew chief.

Another off-season acquisition is Kevin May, who has joined as the number one mechanic on Heimgartner’s car following a short stint at Erebus.

“The structure of the team is so much better and having Andy and Kevin on board is a big step up,” said Hay.

“At this point last year when I arrived we weren’t looking at performance, we were looking at survival.

“It was about getting to the race meetings and trying to put a reliable package on the track.

“We’re not stupid, we aren’t going out chasing the championship, but we’ve got everything we need here to go racing.”

Heimgartner spent the recent test gelling with Hay and the team as well as acclimatising to the Triple Eight-built Holden package after a season in Super Black’s Prodrive Ford.

The Kiwi faces a strong benchmark in rapid team-mate Nick Percat, who continues to work with engineer Chris Stuckey.

“Barry’s credentials speak for themselves so it’s great to be working with him,” Heimgartner told Speedcafe.com.

“Having Nick, Stuckey, Barry and myself together worked really well at the test day.

“For me, the Triple Eight car requires a totally different driving style to where I’ve come from, so I was a bit green for the first few laps.

“But halfway through the day I started to get the hang of it and Nick and I weren’t too far apart by the end.

“I’m really enjoying the team atmosphere here, it’s like a family, so I can’t wait to get stuck into the racing and see what we can do.”