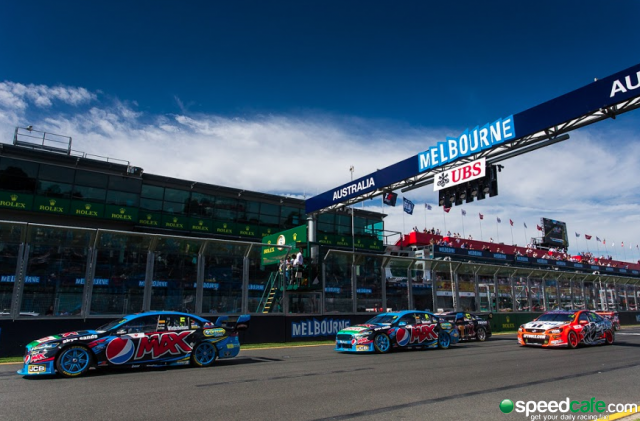 The V8s will again race without points this year

Australian Grand Prix Corporation boss Andrew Westacott has deflected blame for V8 Supercars’ lack of championship status at Albert Park following a threat from the category to quit the event.

The V8 Supercars will again run a series of four non-points scoring races at the grand prix this year despite an ongoing push to be upgraded to championship status.

A frustrated V8 Supercars CEO James Warburton told Fairfax Media at the weekend that the category is unlikely to return once its current contract ends if the situation is not resolved.

“Obviously, we’ll fulfil our contract, which runs through to 2018, but beyond that I can’t see us racing there unless it’s a championship round.”

Conflicting broadcasting rights were long blamed for the non-championship status of the V8 races, which have been the major support act at the AGP every year bar one since 1985.

The stand-off has however continued despite Fox Sports and the Ten Network sharing rights to both V8 Supercars and Formula 1.

Westacott has stressed that V8 Supercars’ issue is with Formula One Management, which ultimately signs off on support category status and the event schedule, rather than the AGPC.

FOM has stood firm on its policy of only allocating 30 minute slots to each support category session, leaving the V8 races in jeopardy of only running for a handful of racing laps if a long Safety Car or red flag is required.

“There are many things that ultimately get signed off by Formula One, it’s their show,” Westacott told Melbourne radio station SEN.

V8 Supercars’ single absence from the AGP in 2007 undoubtedly hurt both parties due to the event’s corporate importance to the sponsors of the Australian teams.

Regardless, Warburton insists that the category can potentially make more money by pursuing other events both locally and internationally.

“It’s a big expense any time our teams go to a circuit and we can have much more profitable weekends elsewhere, especially a new event,” Warburton said.

“We’ll have two international events by ’17 and we’ll be looking to reduce what we’re doing here.

“To stay on the calendar, the AGP will need to be a championship event. Otherwise, we have alternatives that want to be part of the championship.”

In response to the prospect of being without V8 Supercars in 2019, Westacott was quick to point out the return of the Australian GT Championship to the AGP bill this year.

The GTs and Carrera Cup Australia both race for points at the AGP, but do so within the confines of the FOM’s 30 minute support category windows.

“They (V8 Supercars) are a great category, they’re part of Australian folklore and history the Fords versus Holdens,” he said.

“But this year we bolstered the support program with the Australian GTs, which are back for the first time since 2010.

“You’ve got the three McLarens from the Bathurst 12 Hour, a BMW M6 for the first time in Melbourne, Ferrari 488 GT3s, Porsches, Aston Martins, Lamborghinis… so there’s a fair bit of horsepower for people to see.

“But I’d certainly like to have them there because I think they’re a great part of the action.”