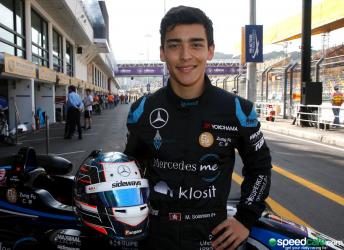 Matt Solomon will pilot one of Eggleston Motorsport’s two new AMG GT3s in the opening two rounds of the Australian GT Championship.

The Hong Kong-based Australian will join the Melbourne squad for this weekend’s Clipsal 500 meeting and the following round at the Australian Grand Prix at Albert Park from March 17-20.

Solomon, supported by the AMG Customer Sports program, has spent the majority of his career in open-wheel categories, competing in the FIA European Formula 3 Championship last year for Double R Racing.

The 20-year-old has limited experience in GT racing but has tasted success alongside former double Formula 1 world champion Mika Hakkinen at China’s Zhuhai circuit in 2013 while driving for Erebus Motorsport.

“I’m obviously super-excited to get the opportunity to race at Clipsal in Australian GT, especially after such a long off-season,” said Solomon, who will drive the #38 entry solo.

“Over the winter break we tried to find the budget for the year, but after talking to our supporters and sponsors, we decided that it would be more sensible to shift our focus to GT racing.

“It’s also allowed me the chance to pursue my studies in Australia, which allows me to follow a career in GTs at the same time.”

He will be joined by a group of AMG technicians at this weekend’s Adelaide opener to ensure the all-new AMG GT3s run by Eggleston and Erebus Motorsport enjoy a successful debut.

The two teams each received a car in early February before taking delivery of their second cars last Saturday, leaving limited time to prepare for the opening round in Adelaide.

Hackett, who is returning to the Australian GT Championship for the first time since 2012, was impressed by how the car performed. 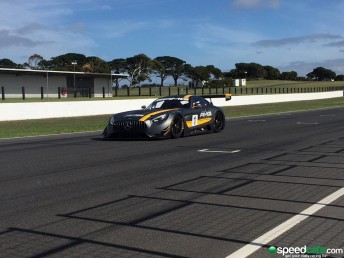 “We literally just took it out of the crate. We didn’t even put a set-up on it and it was a jet.

“Myself and Dom (Storey) are ready to go and comfortable in the car.

“It is good to be back in a car which should be competitive.

“I’m really confident we can run in the top five at Clipsal.”

The car will be run by Erebus in the championship alongside Mark Griffith’s own new AMG GT3.

“We have got a two hour window but it is better than having nothing,” said Erebus Motorsport general manager Barry Ryan of tomorrow’s shakedown.

“The car comes pretty much ready to go. The last car we shook down at Phillip Island had no problems.”