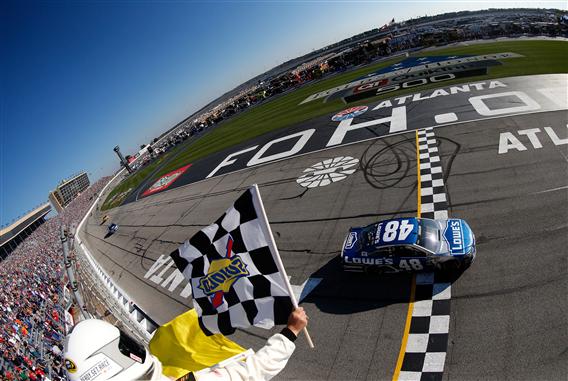 Jimmie Johnson has equalled the race win tally of the late Dale Earnhardt Sr. with a 76th career victory at Atlanta.

Not even a late race caution could stop Johnson, who made the move of the day on the pit road.

Johnson was 15 seconds up the road with 30 laps still to run on the 1.5-mile speedway when Harvick came out after his stop.

Although Harvick cut into the lead, Johnson kept his cool before the caution flew with two laps to go when Ryan Newman had a tyre failure.

All the leaders took four fresh tyres and on the ensuing restart Johnson got the jump.

Then a multi-car wreck on the back straight meant a race to the line with Johnson scoring his fifth win in Atlanta.

Dale Earnhardt Jr. beat Kyle Busch to the chequered flag in a close battle for second.

“Definitely a gutsy call and such a great team effort,” said Johnson, who now sits equal seventh on the list of all-time NASCAR premier series race winners, which is led by Richard Petty on 200.

“The #4 (Harvick) car was awfully tough and it was going to take some strategy to get by him.

“When he (crew chief Chad Knaus) told me to whip it, I thought it was going to take too much out of the tyres, but it worked.

“It is such an honour that on the victory lap I got to throw a three out the window and pay respects to the man (Dale Earnhardt Sr.).

“It’s a huge void in my career that I never got to race with him but at least I got to tie his record.”

The race had just the two cautions with the initial green flag run lasting 210 laps. The long green flag periods meant any mistake on pit road was punished hard.

Matt Kenseth was one of the strong cars early, but lost two laps with a penalty after his fuel man placed an adjustment wrench on the car while refuelling was taken place

Joey Logano collected the traffic cone onto pit road and also had to serve a pass-through penalty.

All 39 starters officially completed the event, although four were in the wreck in the overtime finish.