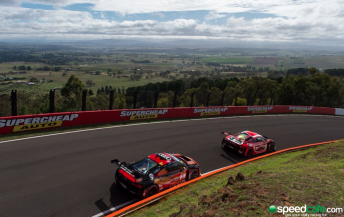 O’Brien’s Yeehah Events has partnered with the Bathurst Regional Council and V8 Race’s Greg Evans to create Challenge Bathurst, which will run on December 1-4 this year.

The event will consist of two days of sprints, where a maximum of 120 cars, split into three groups, can take part in eight x 20 minute timed track sessions.

Up to 250 cars are then able to compete in the following two days of regularity running, with a minimum lap time of 2:40 applied.

The new event follows the demise of the similar Sprint Bathurst four years ago, which was the subject of an extended legal battle between promoter Trackcorp and the council after its contract was not renewed.

With the matter finally settled in the council’s favour last December through the Supreme Court, the path has been cleared for Challenge Bathurst’s creation.

Allan Simonsen famously set a 2:04.96s in a Maranello Ferrari at Sprint Bathurst in 2011, which at the time represented the fastest tin-top lap of the mountain.

“When we started the Bathurst Motor Festival in 2006 there was only one event on the mountain each year,” O’Brien told Speedcafe.com.

“We’re excited to now be adding a fourth that complements what is already in place.

“The mix of the sprint and regularity running will provide everyone from professionals to enthusiasts with the opportunity for track time at Bathurst.

“Our intention is to maximise the field size and have set our prices accordingly. We’re confident we’ll get a good roll up.”

The entry fee for sprint competitors has been set at $2,490 per car, while a regularity slot will cost $1,490. Entry for spectators is free.

Challenge Bathurst has also booked the circuit for Monday, December 5, which is expected to be utilised for road car manufacturer launch programs.

With full Mount Panorama track closures for events only permitted five times a year under state law, the creation of Challenge Bathurst leaves just one slot left for another race meeting.

An historic event has long been mooted for the mountain but is yet to gain significant traction.