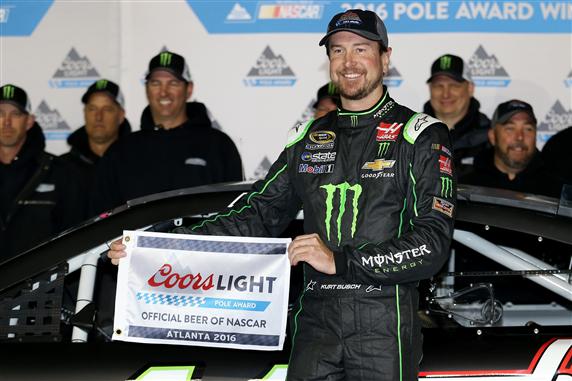 Kurt Busch will start from pole in Atlanta

A post qualifying inspection has seen Kyle Busch bumped to the rear of the field with his brother, Kurt, awarded the pole position at the NASCAR race in Atlanta.

Kyle Busch set the best speed in the final round of qualifying at 308.460 km/h (191.668 mph), prior to the inspection which will now see the Sprint Cup champion start from 39th on the grid.

NASCAR said the degree to which the vertical angle of Kyle Busch’s rear wheels were toed was illegal.

However, apart from having his time disallowed there would be no further penalties applied.

One Busch’s pain is the other’s gain with Kurt now set to share the front row with Jamie McMurray.

“It’s an awesome run that the car had in it,” said Kurt Busch.

“The team did a good job and I was just trying to make sure I didn’t slip a tyre any extra.

“It’s really easy to overdrive Atlanta Motor Speedway. The track challenges the driver, the car and the tyres. It’s a fun place to come and try to lay down a lap.

“Overall with the way the developments came up from tech inspection this shows the amount of enforcement that NASCAR is ready to imply to their technical procedures on what a car has to do to comply to all specs.”

Only 39 cars are entered this weekend making it the smallest NASCAR Sprint Cup field since North Wilkesboro in September 1996 when there were 37 starters.