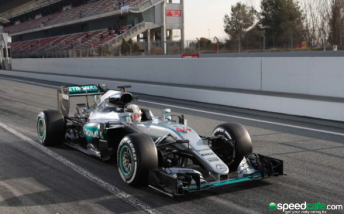 Lewis Hamilton during the final day of the Barcelona test

Lewis Hamilton declared the opening Formula 1 pre-season test as the best he’s experienced as Mercedes posed an ominous threat to the rest of the grid.

The reigning world champion team once again flexed its muscles completing a staggering 3,803km of running over the four days at the Circuit de Catalunya.

Comfortably the most mileage logged by any of the teams, Mercedes is yet to show its hand in terms of raw pace having elected not to use the soft, super-soft or the new ultra-soft compound tyres.

Three-time world champion Hamilton says he was surprised by the mileage covered which saw the team split its test duties between the Brit and Nico Rosberg in bid to keep its pilots fresh.

The reigning world champion hailed his team’s efforts claiming the operation has made a step forward with its W07 chassis.

“The reliability of the car this week has been just incredible,” said Hamilton.

“It feels strong, it feels solid, it just keeps going and going. I’ve never seen anything like it.

“The guys and girls at Brackley and Brixworth have done an unbelievable job. After two titles in a row, it would be so easy to lose focus.

“But it’s clear that everyone is even more focused than before and have done an even better job of delivering an overall package with this car.

“The new front wing seems to be a step forward. It’s small increments here and there – but that’s what we’re looking for.

“It’s been a gruelling week for the whole team – running between 150 and 190 laps every day. But I’d say it’s probably been the best test we’ve ever had. Certainly the best I’ve ever seen.”

Mercedes will join the rest of the F1 paddock for the final pre-season test at Barcelona from March 1-4.