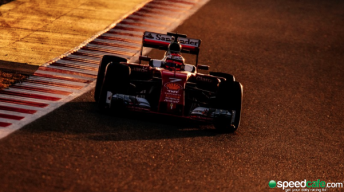 Kimi Raikkonen set the benchmark on the final day

Kimi Raikkonen ensured Ferrari’s impressive start to the new Formula 1 season continued by topping the times on the final day of the Barcelona test.

The Finn made the most of a run on the new ultra soft tyres to post a session best 1:23.477s, which was 0.6s slower than the fastest overall time set by team-mate Sebastian Vettel on Tuesday.

However, it was once again another strong showing from the Maranello team having topped the times on three of the four days of the test.

“We don’t look at what the other teams do, we do our stuff and get ready. It’s up to us to make sure we are in a good position. There is a good potential but we can still improve.”

A late run from Force India development driver Alfonso Celis popped the Silverstone outfit into third ahead of the Renault of Kevin Magnussen, which completed 153 laps.

Although for the second day in succession Magnussen brought out the red flags when his car came to halt late in the afternoon session.

Toro Rosso’s Max Verstappen enjoyed a trouble-free day in fifth ahead of Sauber’s Felipe Nasr, who clocked up 121 laps.

The pair both tested Mercedes’ new nose design following its arrival at the circuit on Wednesday.

Rosberg edged Hamilton by a tenth to finish the day in seventh, with the pair running the entire session on the medium tyre.

The Williams of Felipe Massa and Haas F1’s Esteban Gutierrez completed the top 10 with the latter undergoing a full race simulation.