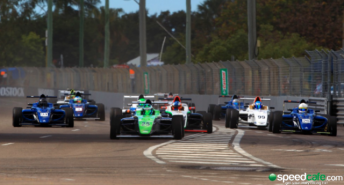 Teenagers Brenton Grove and Will Brown are the first drivers to take up a new $50,000 Formula 4 scholarship from CAMS.

The Australian motorsport governing body has confirmed it will make 10 scholarships available as it invests more finances in establishing the new junior single seater formula after a challenging maiden year.

Competitors aged 21 or younger will be eligible for the grants which will be put towards their budget for the season.

Under the conditions of the new initiative drivers will have to make an unspecified financial return to CAMS over the course of their professional careers.

It is hoped the scheme will increase grid numbers for the category which struggled to maintain a field in the teens during its inaugural season.

In response to high costs, CAMS has since reduced fees for this year’s championship with the scholarship the latest concept to ease the burden on young aspiring drivers.

While grid sizes are lower than those seen in Europe, five of last year’s competitors have since secured deals to develop their careers in Europe and America this year.

“The 2015 Formula 4 season was an unprecedented success in terms of driver development, launching five young Australian racers onto the international motor sport scene in just one year.

“Apart from the state of the art safety features of these cars, Formula 4 has created an historic outcome in our first year, supporting young Australian drivers striving for international success.

“This success, along with the strong financial position of the organisation, has allowed CAMS to do more for young driver development in Australia.”

Grove and Brown have taken up the first two scholarships following confirmation of their moves to championship winning squad Team BRM.

Grove, the son of Porsche Carrera Cup driver Stephen Grove, will make his single seater debut in the championship this year, moving across from the Porsche GT3 Cup Challenge.

“For me, the opportunity to work with Team BRM and be associated with CAMS through their scholarship program is something that is really special,” Grove said.

“Team BRM’s pedigree in open wheelers and their past history of working with young drivers is second to none.

“For someone like me who missed the karting phase, a series such as F4 is the perfect platform to learn the necessities of racing, having the opportunity to compete against some of the best young kids in Australia.”

After finishing third in last year’s championship, Toowoomba-born Brown will be considered among the favourites for the championship.

“With a year’s experience in the cars already under his belt, we’re looking forward to him being a contender for race and round victories from the very first race of the season at Symmons Plains this April,” said team manager Mark Rundle.

“He’s already a proven winner and this year he will work closely with the team to translate the performance he already has into a championship victory.”