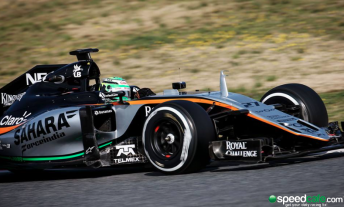 Force India surged to the top of the times on the third day of Formula 1’s pre-season test in Barcelona.

However, it ensured he ended the day quickest by 2.7s from Haas F1’s Romain Grosjean following the Frenchman’s late effort on soft tyres.

“A positive day for me and I’ve come away with some good first impressions as we continue to learn about this car,” said Hulkenberg.

“We tried quite a lot of things today and, although we need to do some more fine-tuning, it does feel like we are moving in the right direction.

“The important thing is that we are getting lots of laps under our belt at this early stage and we are able to start exploring different set-ups.

“Melbourne is not far away, but it feels like we are on schedule and days like this are very encouraging.”

After topping the opening two days, Ferrari endured a mixed day with Kimi Raikkonen limited to installation laps in the morning running as the squad completed a series of checks.

By the end of the day the the Finn completed 78 laps with his best time good enough for third fastest.

The French manufacturer suffered software issues on the Monday, while a turbo problem restricted Jolyon Palmer to only 42 laps on Tuesday.

It wasn’t a completely trouble-free day for the team however as Magnussen stopped on track with an hour remaining.

Mercedes split its driving duties between Nico Rosberg and Lewis Hamilton with the former posting the fifth fastest time after a 74 lap morning run.

Hamilton clocked up 88 laps in the afternoon which saw him end the season in eighth spot.

Both drivers ran on medium tyres with Mercedes not expected to use soft rubber this week.

Carlos Sainz logged the most mileage with the Toro Rosso driver completing 161 laps.

The Spanish driver was sixth overall ahead of Sauber’s Felipe Nasr.

Red Bull’s Daniil Kvyat and the Williams of Felipe Massa rounded out the top 10, while a hydraulic fire limited McLaren’s Jenson Button to 51 laps.