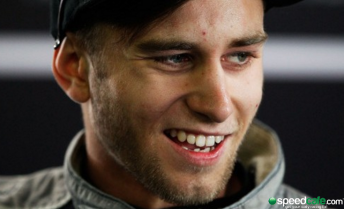 Andre Heimgartner says the trials and tribulations of recent months have left him more determined than ever to forge a career in the V8 Supercars Championship.

The 20-year-old will have his first steer of a Lucas Dumbrell Motorsport Holden at Winton tomorrow, just weeks after cutting a late deal to return to the category.

Debuting as a full-timer in the championship with Super Black last year, the Kiwi’s career was dealt a blow when he was benched in favour of Chris Pither with two events remaining.

Talks with LDM, however, continued, and by early February the Auckland native had managed to fight his way back onto the V8 Supercars grid.

“I was pretty devastated with what happened,” Heimgartner told Speedcafe.com of his exit from the championship last November.

“If you realise one of your dreams and then it gets taken away from you, you’re obviously pretty devastated.

“It was a hard time for me, so to come back after all that and the rollercoaster of the last two months, it’s very special.

“It’s driven me to push harder and work harder in every element of myself and my racing to make sure that something like that doesn’t happen again.”

Heimgartner says he learnt just as much off the track as he did on last year, which included the need to hire a manager to help guide his career and attract sponsorship.

Prior to stepping into the main series, Heimgartner had enjoyed a relatively rapid rise through the junior categories, including stints in the Carrera Cup Australia and Dunlop Series.

“Whenever you’re new to an industry or a category, there’s always things to learn,” he said.

“Every great driver has dealt with it. When Jamie Whincup got let go by GRM (after his rookie season in 2003), he would have learnt a lot from that experience.

“It’s all about learning, including what to have in your contracts and all of that side of it.

“Dad and I had been doing our own thing throughout my career and it (the Super Black experience) really highlighted the point that we needed a manager, which we have now in Dale Brittain.”

Heimgartner’s unexpected career shake-up has also seen him take up a job as a data consultant with a finance company between his racing commitments.

“I work nine hours a day, four days a week,” he explained.

“It’s a distraction but I think it’s a good one. It helps you keep it real and appreciate what you’ve got.

“The reality is I need to make money to live. It (being a V8 Supercar driver) is not as glamorous as some people think.”

Having enjoyed front-running equipment courtesy of Super Black’s Prodrive Ford last year, moving to one of the category’s smallest teams in LDM will take some adjustment.

Although external expectations are low, Heimgartner is positive about the team’s chances of being competitive in the mid-field.

“Obviously it’s a bit of a change going from PRA to Lucas’ team, but he is putting a lot of time and money in this year to help step it up,” said Heimgartner.

“Nick and I will do our best to push the cars forward. Last year they could have had some good results but were let down by a few little things.

“Nick is obviously seen as one of the most raw drivers in terms of speed. To have someone like that in the team is a good benchmark for myself.

“The basics of the package are all there. I don’t think we’ll just be a grid filler.”

LDM is set to reveal its new sponsor line-up and liveries tomorrow morning ahead of its hit-out at Winton.

It will be joined at the Victorian circuit by Erebus Motorsport, which is giving its ex-Walkinshaw Holdens a run ahead of the March 3-6 Clipsal 500 Adelaide.

Both teams had been initially scheduled to test with the remaining Victorian-based squads on Monday before opting for extra workshop time before hitting the track.