Vettel topped the times on the opening day

Sebastian Vettel put Ferrari’s new car at the top of the timesheets on the opening day of pre-season testing at Barcelona.

The German clocked a best of 1:24.94s during his 69 lap total to end the day almost 0.5s clear of Lewis Hamilton’s Mercedes.

Although downplaying the significance of topping the times, four-time world champion Vettel is full of praise for Maranello’s latest offering.

“I think the first impression is very positive. Generally it feels like a step up.”

Reigning world champion Hamilton chalked up a phenomenal 156 laps – a full 68 more than any other – as he put the team’s W07 through its paces.

“The team has done an incredible job to get the car running the way it has – completing so many laps with no real problems,” noted the Brit. 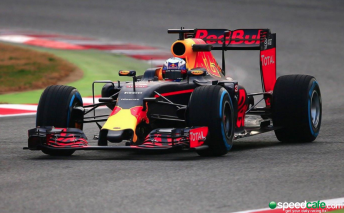 “It’s hard to say how the others look at this point and we won’t know how competitive we are until everyone really starts pushing. But we’re not looking too bad, that’s for sure.

“I hope the Ferraris are up there with me and Nico this year, as that would be exciting for the fans and exciting for me too.”

Daniel Ricciardo took Red Bull’s new RB12 to third fastest, albeit more than a second away from Vettel’s pace.

Valtteri Bottas was next for Williams ahead of Force India reserve driver Alfonso Celis, who used soft tyres to set his best time.

Jenson Button put solid miles on the new McLaren-Honda on the way to sixth ahead of Carlos Sainz’s Toro Rosso, which completed just 55 laps due to a gearbox issue.

Marcus Ericsson was eighth for Sauber, which is the only team not running its new car at Barcelona, while Pascal Wehrlein (Manor), Romain Grosjean (Haas) and Jolyon Palmer (Renault) completed the field.

Haas’ first day as a Formula 1 outfit included a front-wing failure, with the resulting debris causing the only red flag.