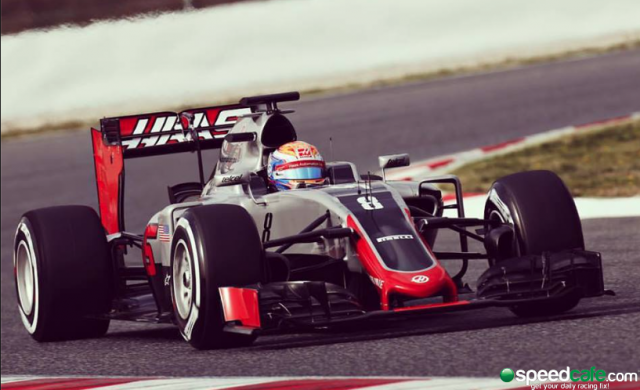 Romain Grosjean behind the heel of the Haas F1 VF-16

Romain Grosjean says Haas F1 will have a solution to its front wing issues encountered during the debut of its VF-16 when testing resumes at Barcelona today.

Formula 1’s newest team completed only 31 laps on its testing debut after Grosjean suffered a front wing failure which caused the only red flag period in the session.

The North American team were restricted to short runs utilising a spare front wing for the remainder of the test, while it evaluated the cause of the failure.

Grosjean is however confident the issue will not rear its head when testing resumes following reports of a strengthened front wing arriving at the circuit from its European base in Banbury.

“We had a small issue with the wings that took up some time, but we have fixed it for tomorrow (Tuesday),” said Grosjean.

“We understood the problem very quickly, it was clear to everyone.

“It shouldn’t be too hard to fix, and there’s a 99 percent chance that we have solved the problem.”

Esteban Gutierrez is scheduled to take the wheel of the VF-16 for the second day of the pre-season test.