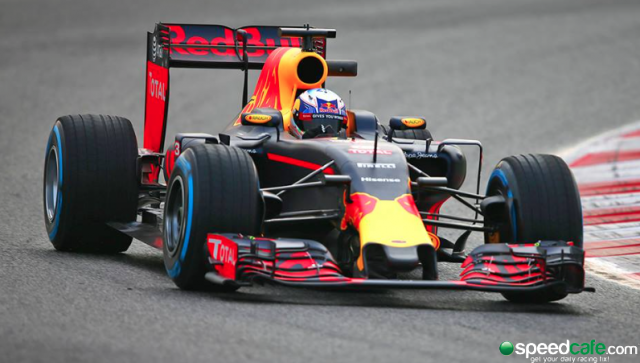 Daniel Ricciardo declared his start to the Formula 1 season as positive despite a lack of gains from his Renault power unit on the opening day of testing at Barcelona.

The Red Bull driver chalked up 87 laps behind the wheel of the team’s new RB12 chassis, ending the day third fastest behind Sebastian Vettel (Ferrari) and Lewis Hamilton (Mercedes).

Embarrassed by a lacklustre power unit last year, Renault has spent the off-season trying to close the gap to Ferrari and Mercedes.

Despite the work over the European winter, Ricciardo says he failed to notice any difference from the power unit but is confident performance gains will come as testing continues.

“It pretty much feels like we ended last season, which isn’t a bad thing,” said Ricciardo of the team’s engines, which are now branded TAG Heuer following a partial split with Renault.

“I think on day one it’s a lot better platform to work from than what we had this time last year.

“There wasn’t any whiplash or anything like this, but I’m a bit happier and it’s a good start, it’s probably all we can ask for, for now.

“We are still not on race trim, in terms of power, and we don’t have all of the bolt-on bits on it at the moment.

“For now it is as expected. The team did say ‘expect something similar to last year’, for the first test at least.

“It’s pretty much that for now. I would say it’s a decent start.”

Power unit aside Ricciardo was pleased with results on the opening day of testing with the team enjoying a relatively trouble-free day.

“We had a few little bits and pieces but we still managed nearly 90 laps today so generally it was a good first day,” he said.

“With the few little issues we had we still managed some good long runs.

“I think that was important today, to get some good 15-lap runs to make sure the car’s not overheating or doing anything silly.

“We can then find the pace quite easy, reliability is always the first thing you want to try and solve.”