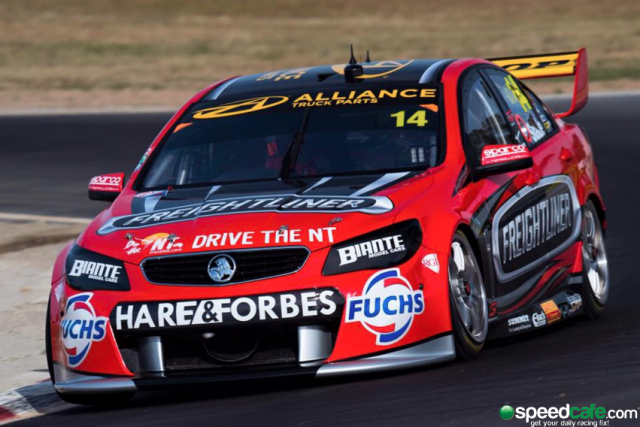 Tim Slade set the fastest time of the day at Winton

Tim Slade made the perfect start to his stint at Brad Jones Racing by setting the fastest time in Winton’s pre-season V8 Supercars test.

A total of 16 V8 Supercars Championship cars and 11 Dunlop Series entries shared the circuit throughout the day as both classes prepare for the Clipsal 500.

Debuting a new BJR chassis, Slade recorded a 1:21.26s while running a pre-marked set of soft tyres on his 23rd lap of the morning.

That left the Freightliner Commodore at the top of the sheets for the remainder of the day as high temperatures prevented faster times during green tyre runs in the dying stages.

The Holden Racing Team’s James Courtney was the quickest of those to run greens at the end, stopping the clocks just 0.09s shy of his Holden rival.

Courtney had endured a trip into the Turn 2 wall during the morning, forcing his team to make front-end panel repairs to his brand new car.

“It’s the perfect way to start the year and I’m really enjoying working with this team,” Slade told Speedcafe.com.

“We surprised ourselves with the time we did with those softs at the start because they were about a year old.

“The car felt really good later in the day, even though the times were a bit slower because of the track temperatures.

“Then we bolted on green hards and green softs at the end and the car actually felt terrible compared to earlier but we were still competitive, so I’m sure everyone’s cars felt terrible.”

The day was filled with off track excursions as drivers fought snap-oversteer on the newly resurfaced layout.

“The surface is what caught me out this morning when I had a bit of a tank-slapper coming out of Turn 1,” Courtney told Speedcafe.com.

“The surface was horrendously dirty and all the dust and debris from the inside of the kerbs was being pulled onto the track all day.

“The clean line wasn’t even one car width, it was two tyre tracks.

“In the end the times were faster but the track conditions were really tricky.”

The day proved a solid return to action for Mostert following his injury layoff and a trouble-free debut for his new car.

CLICK HERE for more from Mostert on his return.

Jason Bright’s last lap of the day proved good enough for fifth, while the Nissans of Rick and Todd Kelly were sixth and seventh respectively.

Mark Winterbottom showed strong speed on the hard tyres early in the day before falling to eighth, while Lee Holdsworth and Garth Tander completed the top 10.

Garry Rogers Motorsport’s James Golding was the fastest of the Dunlop Series runners, with his Car of the Future specification Holden just over 0.1s clear of Paul Dumbrell’s previous generation Commodore.

GRM’s Volvos ended up just 16th and 18th on the time sheets respectively, with mechanical issues limiting McLaughlin to 58 laps.

Dale Wood also lost time with mechanical issues during his debut with Nissan, splitting the Volvos in 17th.

Dunlop Series testing will continue at the circuit tomorrow, while V8 Supercars Championship squads Erebus Motorsport and Lucas Dumbrell Motorsport will hit the track on Thursday.