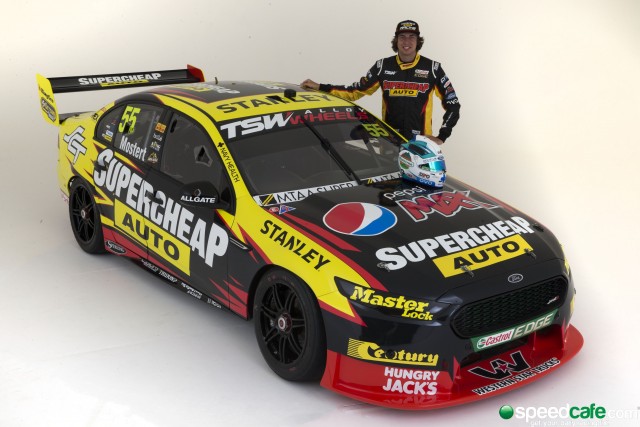 Chaz Mostert has taken the covers off the new Supercheap Auto backed Ford Falcon he will pilot in this year’s V8 Supercars Championship.

The 23-year-old will adopt the familiar yellow, black and red colours of the automotive brand for his return to the championship with Prodrive following a four month recovery from injury.

Mostert’s promising 2015 campaign came to abrupt halt when he sustained a broken left leg and wrist alongside knee ligament damage in a horrific crash in qualifying at October’s Supercheap Auto Bathurst 1000.

Alongside the change in title sponsor from Pepsi Max to Supercheap Auto, the 2014 Bathurst 1000 winner will also switch numbers, running #55 for the new campaign.

To accompany the announcement a video has been produced which sees Mostert unveil the Supercheap Auto Falcon FG X with the aid of his Bathurst 1000 winning co-driver Paul Morris and stunt driver Matt Mingay.

Meanwhile, Mostert is confident he will be in a position to start the season strongly at the Clipsal 500 from March 3-6.

“I am really excited to reveal my new colours for 2016 and to have done so in such a cool way with help from Paul, Matt and some sweet Supercheap Auto toys,” said Mostert.

“This season is a fresh start for me after the abrupt end to last season and with a brand new chassis, new sponsor and new engineer I have high hopes I can quickly get back among the frontrunners.

“I am not setting any specific goals as I am well aware it isn’t going to be an easy road back once we start racing but I’ve got a great group of people around me and I’ve hit all my rehab targets so we’ll start the season as strongly as possible.”

CLICK HERE for more from Mostert ahead of his V8 Supercars return.

Mostert will drive his newly liveried Falcon FG X for the first time at today’s pre-season test at Winton.