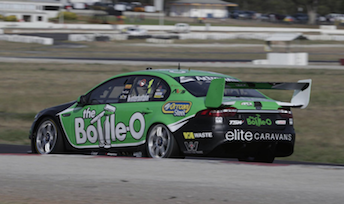 Teams have praised the recent upgrades to the rural Victorian venue, but admit that the change has provided an extra challenge as they prepare for the season opening Clipsal 500 Adelaide.

An early 1:21.26s from Tim Slade is the fastest time to the halfway mark of the day’s running, which sees 16 V8 Supercars Championship entries on track.

All of the fast times so far were set during the early stages before rising temperatures tempered lap speed.

“Like any new surface it’s created a lot of front turn in the cars,” explained reigning champion Mark Winterbottom between stints aboard The Bottle-O Ford.

“We came here trying to get front turn out of the car and the track has actually given us a lot more.

“It’s made the sweepers very tough now because when you’re far in and get it slightly wrong you’re off the track.

“Every lap there’s a car off the track. It’s pretty tough but thankfully there’s lots of run-off.

“Some of the things you test we’re probably going to have to re-evaluate because you’re always on edge.

“But the tyre life is better so you can back-to-back things a bit better. It’s just made the day a bit different.” Among those to find early trouble was James Courtney, whose Holden required new front-end panels following contact with the wall at Turn 2.

Todd Kelly was meanwhile among those to cause red flags after a spin that left the Nissan in the Turn 4 gravel.

“The track is mega, they’ve done a really good job with it,” Kelly told Speedcafe.com.

“It’s got good grip and they’ve smoothed out a lot of the bumps, but it’s just really slippery if you get off the line.

“I just lost the rear on turn-in like Chaz (Mostert) did last year (in the race meeting) but thankfully pulled it up before the wall.”

Lee Holdsworth, who is debuting the new Team 18 outfit today, noted that the track changes have required more than just a rethink on set-up.

“The way the kerbing has changed takes a little bit to get used to in terms of what you use and what you can’t,” he told Speedcafe.com.

“You can carry a lot more speed through the last corner now. We might be pulling sixth at the end of the front straight on softs.

“The conditions aren’t great for times at the moment, but I think it can be two to three seconds quicker with the new surface.” 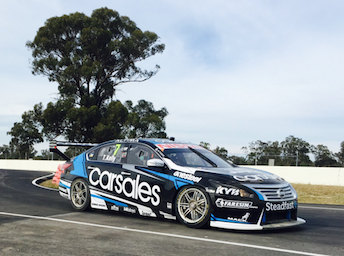 Returning from an injury lay-off, Mostert says the extra challenge of the new surface is a great warm-up for his racing comeback in Adelaide.

“It’s thrown everyone off a bit set-up wise,” he said.

“The car balance isn’t quite right but you’ve got to keep in the back of your head that you haven’t lost anything, it’s just the track.

“It’s a good challenge for us straight off the bat. It’s testing us out and testing all of our resources.

“I think it’ll give us (the Victorian teams) a leg up going into Clipsal.”