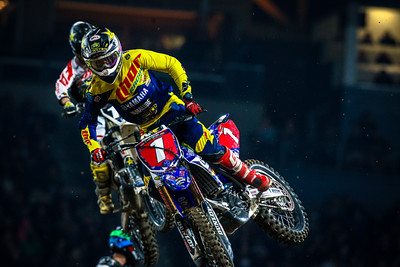 Ken Roczen and Cooper Webb have re-established themselves as AMA Supercross championship contenders by each claiming victories during round seven in Arlington.

Roczen held Dungey at a 2s margin for the entire race and collected his second main event win of the season with Dungey claiming second.

Rockstar Energy Husqvarna’s Jason Anderson made the most of a decent start, landing himself on the podium for the first time since his win at round one.

Tomac’s seasonal results continue to be brought into question after being brought on by Kawasaki to plug the hole 4-time AMA SX champion Ryan Villopoto left.

Red Bull KTM’s Marvin Musquin staged a solid fightback during the main event, when he clawed his way to a sixth place finish following a first turn crash.

In the 250 class, Webb ended his three race drought by notching his fourth race win of the season.

Victory enable Webb to extend his points lead to 11.

As the main event kicked off, Christian Craig and Joey Savatgy battled for the lead position before coming together on lap two, resulting in Savatgy going down in the whoops.

Geico Honda’s Craig took sole possession of the lead and attempted to check out before being chased down by Webb.

Dungey continues to lead the 450 championship with 166 points, trailed by Roczen with 143 and Jason Anderson with 131.

Webb now reclaims the championship lead in the 250 class with 145 points, followed by Savatgy with 134 and Christian Craig with 129.

The series heads to the Georgia Dome in Atlanta for round eight, where the East Coast 250cc series opener will commence next weekend.