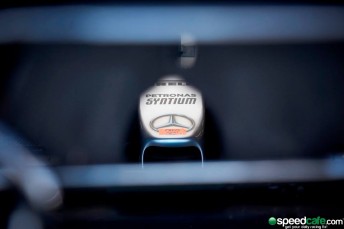 Mercedes will officially uncover its W07 on Monday

Mercedes has completed a shakedown of its new W07 Formula 1 car at Silverstone.

The reigning world champion squad uncovered its latest F1 challenger ahead of its official launch at the Barcelona pre-season test on Monday.

Drivers Lewis Hamilton and Nico Rosberg both jumped behind the wheel for laps of the Northamptonshire circuit.

The outing was declared as a filming day which means the team cannot exceed 100km of running according to the FIA Formula 1 sporting regulations.

Mercedes will join the rest of F1 paddock at Barcelona on Monday for a four-day pre-season test.