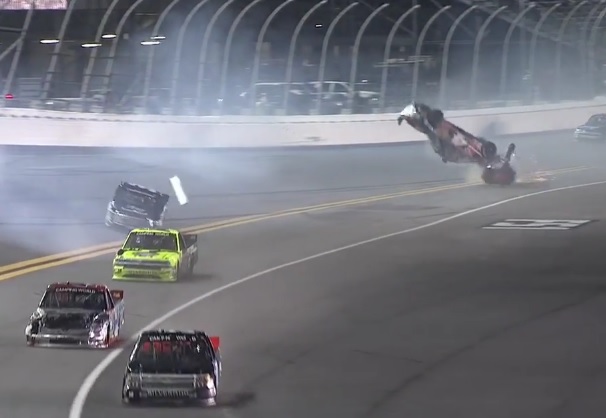 As the field took the final lap white flag, a chain reaction crash near the front of pack saw Bell’s truck sent into the outside fence and then barrel-rolled down the track.

It was estimated that Bell tumbled 10 times, but thankfully the 21-year-old Kyle Busch Motorsports driver climbed out uninjured after his No. 4 truck came to rest upside down.

NASCAR and track officials took no chances with Bell’s condition, sending him to a Daytona Beach hospital for medical observation.

Johnny Sauter, who was in front at the time, was awarded the race victory as the caution lights came on. Ryan Truex and Parker Kligerman finished second and third, respectively.

That race-ending crash came after another “Big One” when on Lap 93 of 100 contact between Timothy Peters sent Cameron Haley into the pack.

That incident involved 20 trucks and forced organisers to bring out the red flag for nearly 30 minutes.

Tomorrow the Xfinity Series will run its race, followed by the biggest race in NASCAR, the Daytona 500 early morning Australian time.

VIDEO: The other “Big One”