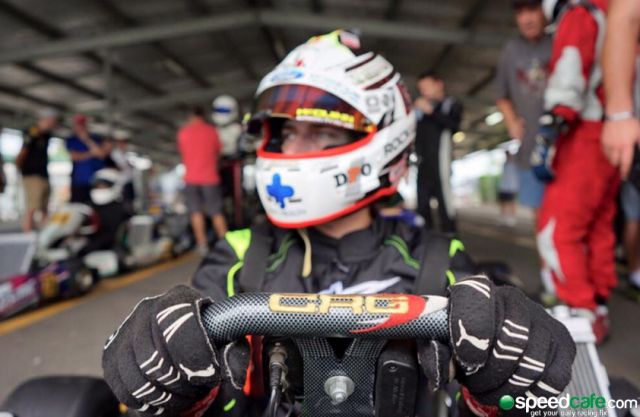 Chaz Mostert will be back behind the wheel today

Chaz Mostert will today continue the build-up to his V8 Supercars return with another competitive karting appearance at Ipswich in Queensland.

The 23-year-old is set to recommence duties with Prodrive at Monday’s pre-season test, driving a V8 Supercar for the first time since a horrific crash at Bathurst in October.

Mostert has undergone an extensive rehabilitation program since the accident, which left him with a broken left leg, a fractured left wrist and ligament and cartilage damage in his left knee.

Although admitting that the knee remains some way from being fully healed, the 2014 Bathurst winner is confident that he’ll get through Monday without issue.

“There’s a bit more strength to find in my leg because it was really a six month injury or more,” Mostert told Speedcafe.com.

“Broken legs aren’t too bad but when you’re playing with ligaments there’s a road to recovery.

“It’s not 100 percent, but I’m at the point now where I’m pretty confident that I can do what I have to do in the car.

“If it was my right leg it’d be a bit of a different story, but I am very lucky that it was my left leg that only has to focus on one pedal.”

Amid his duties with Prodrive in Melbourne, Mostert has flown back to Queensland for today’s second Ipswich Kart Club championship round.

Having won every race in his class at the opening round late last month, the driver admits that today’s outing is a mixture of training and pleasure.

“Karting is really great for putting the leg through its paces,” he said.

“It’s a great tool for preparing for the V8 because driving a kart is really harsh on the body and the muscles and sharpens your reactions.

“It’ll help me get my eye back in and is also a bit of fun because it’s a great karting community out there.”

Mostert hopes to utilise Paul Morris’ driving school on the Gold Coast to get more time behind the wheel in the lead-up to the Clipsal 500, where he’ll bring his own physio to help monitor proceedings.

While speaking candidly about his long road to recovery, Mostert is quick to dismiss any suggestion that returning from such an accident will include overcoming any mental hurdles.

“It’s just one of those things,” he dead-panned.

“We go out there to go as fast as we can and sometimes you’re going to have an accident.

“For me, I love the sport and I love driving quickly. I haven’t watched the crash many times. It’s just not even on my mind.”

Regardless of the injury, Mostert will have to overcome the off-season setback of losing race engineer Adam De Borre to DJR Team Penske.

De Borre has engineered Mostert throughout the youngster’s career in the main game to date, starting at DJR midway through 2013.

Mostert is now working with Brad Wischusen, who engineered David Reynolds last season after making the switch from Erebus Motorsport.

“Obviously it was a massive loss at the end of last year losing Adam,” admitted Mostert.

“I’ve had a great relationship with him, but these things happen and you’ve got to roll with the punches.

“Brad worked with Dave last year and is very talented. We’re getting along well and hopefully I can learn some new things off him.

Having been the championship’s form driver prior to last year’s accident, Mostert hopes that his difficult off-season will have minimal impact on his 2016 campaign.

The driver’s brand new Supercheap Auto backed Ford is set to be revealed on Monday ahead of the test, which will double as a shakedown for the chassis.

“The goal for me now is to get back on the podium as quick as we can and spray that champagne,” he said. “That’s what it’s all about.”