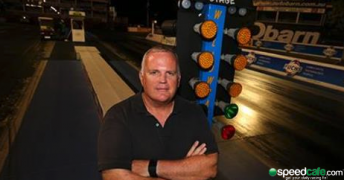 Manson, a former V8 Supercars Operations Manager, is said to have stepped down due to family reasons.

He had been in the role for the last few years after replacing Steve Bettes.

During his tenure at the facility, Manson made the bold step of introducing the International Hot Rod Association (IHRA) into Australia as a competitive sanctioning body.

“I have thoroughly enjoyed my time here, but my family is interstate and I have a desire to be with them more often,” Manson said in an official release.

“There are significant plans for both the facility and drag racing (that are) underway that require a longer-term obligation and I feel I cannot make the commitment.

“Stepping down allows someone fresh to have input into the long-term decisions required and follow those plans to completion.”

Manson’s departure comes at a time of upheaval for drag racing in Australia, with the new for 2015/2016 400 Thunder Series experiencing diminishing interest for feature categories.

Australian National Drag Racing Association’s hold over the sport has all but been eradicated following the formation of the 400 Thunder Series by the major tracks and competitor groups, along with the adoption of the IHRA Sanction.

The next round of the 400 Thunder Series is this weekend at the Perth Motorplex.