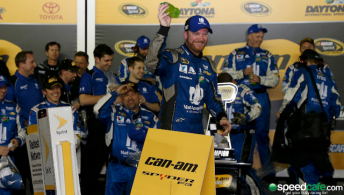 Dale Earnhardt jr has taken an emotional win on the 15th anniversary of his father’s tragic death at Daytona.

Earnhardt jr took victory in the opening leg of the Can-Am Duels, claiming the 60-lap race from Joey Logano.

The win co-incided with the date his legendary father, a seven-times Sprint Cup champion, was killed on the final lap of the Daytona 500 in 2001.

Earnhardt jr, a two-times Daytona 500 champion, dominated by leading 43 of the 60 laps.

“I was daydreaming a little bit,” Earnhardt Jr. said.

“I’m guilty of daydreaming a little bit about winning this race tonight because of the day.

“That was special to me. Glad nothing bad happened, that we didn’t tear our car up, because that would have been embarrassing on a day like this.”

Ryan Blaney took third place ahead of Kevin Harvick and Denny Hamlin were next in front of Daytona 500 polesitter Chase Elliott.

Cole Whitt brought out the only caution of the race after his spin in the Toyota late in the race before eventually retiring 13 laps from the end with a mechanical problem.

Subsequently Whitt missed securing a spot in the 500 field. 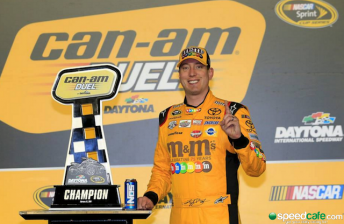 Kyle Busch takes victory in the second of the Duels

In the second Duel, Joe Gibbs Racing’s Kyle Busch clinched the win after leading 35 of the 60 laps.

It was a routine event until the final lap when Jimmie Johnson hit the wall before Matt Kenseth, Martin Truex jr, Kurt Busch, AJ Allmendinger and Danica Patrick all become all involved.

There was heavy damage to the Toyota of Kenseth, who is scheduled to start beside Elliott on the front row of the Daytona 500.

Kenseth could be forced to start from the rear of the field if the damage cannot be fixed and he reverts to the back-up car.

Both David Gilliland and Reed Sorenson have missed out on starting berths for the signature Sprint Cup opener.