Coulthard ‘under no illusions’ amid building phase

Coulthard ‘under no illusions’ amid building phase 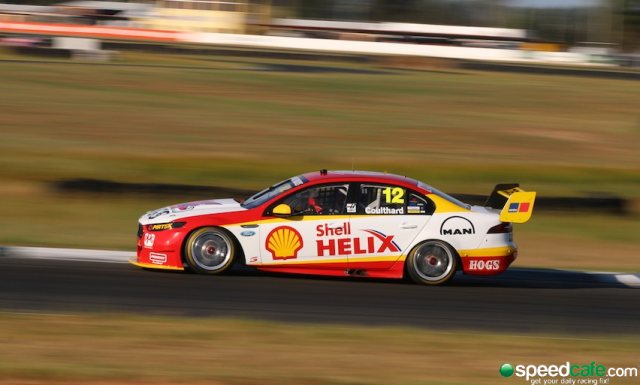 Fabian Coulthard insists it will take time for DJR Team Penske’s new engineering group to gel this season, despite the squad’s strong form in testing at Queensland Raceway.

Showing impressive pace on both hard and soft tyres, the DJRTP Fords ended yesterday’s test one-two on the time sheets, with Scott Pye edging Coulthard for the top spot by just 0.01s.

Sharing the circuit with Triple Eight and Tekno Autosports, the day was the first track time for DJRTP since expanding to two cars and undertaking a major off-season recruitment drive.

The two cars ran through separate programs throughout yesterday’s test as they explored their package ahead of next month’s Clipsal 500.

An encouraged Coulthard told Speedcafe.com that the Ford is “not a hell of a lot different” to drive than the BJR Holden, but that understanding its set-up requirements will take time.

“We’ve ticked a lot of boxes during the day, but I’m under no illusions that there will be a building phase,” Coulthard told Speedcafe.com.

“It’s hard for Phil and I to come in and reinvent the wheel, which is not what we want to do by any means.

“We want to get on top of the car and suss out how it performs in its current state. These guys did a good job last year and I feel there’s definitely some things to learn from the current package.

“It’ll be good once all the boys start to work together. Everyone has ideas at the moment but we’ve got to try and keep it a tight-knit group.

“I’ve got a quick team-mate that I can bounce ideas off and once we get this engineering group working together that’s when we’ll start to see some real results.”

Excited to have a team-mate to benchmark himself against after taking over the team’s single car partway through last year, Pye says he immediately felt improvement in the package at the test.

“It’s a little bit more driveable than what it was last year. The margin for error is a lot bigger now,” he told Speedcafe.com.

“Your confidence grows because you know that you can push a bit harder and the car will allow you to do it. I felt more confident in the car straight away.

“If you go slightly over the limit you’re not going to go off and completely scrap the lap. It’s a car we can tune and improve on.

“We ran our own programs during the test. It’ll be important that we understand what both cars tried before we get to Clipsal, which wasn’t a luxury we had last year.”

The threat of DJRTP’s growing competitiveness has the attention of Triple Eight, which ended up third, fourth and fifth on yesterday’s combined time with drivers Jamie Whincup, Craig Lowndes and its own new recruit Shane van Gisbergen.

“You can read a little bit into it,” Triple Eight team manager Mark Dutton told Speedcafe.com of the times.

“They (DJRTP) are going to be strong and they have shown that straight away.

“On the hard tyre they were quicker than us but on the soft tyre we ran further apart in terms of track condition.

“How that correlates if we ran at the same time we don’t know, but they were definitely quick.

“They have got two very fast cars there and will be strong this year, no doubt about that.”

While Coulthard and Pye are both cautious when it comes to expectations for the season, both are eager to see where they stack up in Adelaide on March 3-6.

“I feel like we’re the team that’s coming,” said Pye.

“To do it week in, week out is going to be a challenge, but I feel that we are going to be very competitive this year.

“We just need to make sure we focus on ourselves as much as we can and keep improving.

“Clipsal is obviously a lot different than Queensland Raceway but it’s a place that I love to go to. We’ll see what happens.”