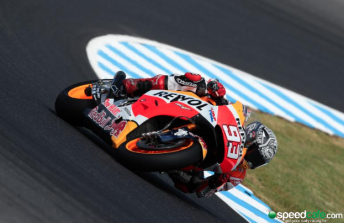 Marc Marquez emerged as the pacesetter on the final day of the MotoGP pre-season test at Phillip Island which was littered with incident.

The factory Honda rider clocked a session best 1:29.158s in the final 90 minutes of running which was just 0.027s slower than the benchmark set by Maverick Vinales yesterday.

Vinales once again showcased the pace of the Suzuki ending the session in second spot just 0.141s adrift of Marquez, with LCR Honda’s Cal Crutchlow in third.

However, Thursday’s pacesetter was one of a handful of riders to suffer falls during the day.

Testing began in dry conditions before rain showers arrived in the afternoon which ultimately saw the session halted for two hours.

While Vinales emerged from his crash unscathed, a heavy accident for Danilo Petrucci brought out the red flags with the Italian suffering several fractures to his right hand.

It is unclear whether the injury will see the Pramac Ducati rider miss the opening race of the season at Qatar from March 18-20.

Australia’s Jack Miller, who finished in 14th spot, was another rider to suffer a fall but he escaped without injury.

The Townsville rider’s Marc VDS team-mate Tito Rabat along with Marquez, Crutchlow, Jorge Lorenzo, Bradley Smith and Eugene Laverty were also caught out by the conditions.

Avintia Ducati’s Hector Barbera impressed on his way to fourth fastest ahead of Yamaha’s Valentino Rossi.

Next Story Petrucci to undergo surgery in Melbourne