Will Davison excited by Tekno potential Davison behind the wheel of the Tekno Holden. pic: Matthew Paul Photography

Will Davison has declared himself ready for the new V8 Supercars season with Tekno Autosports despite a bittersweet test day at Queensland Raceway.

The run at the Ipswich circuit presented Davison with a valuable opportunity to adapt to his Triple Eight built Tekno Holden Commodore and integrate himself with his new team.

Hampered by a differential issue, the former Erebus driver completed just 17 laps in the morning session before clocking up 66 laps in the afternoon.

Although frustrated to lose valuable track time early in the day, Davison says he feels comfortable behind the wheel of his new challenger and is already excited by its potential. 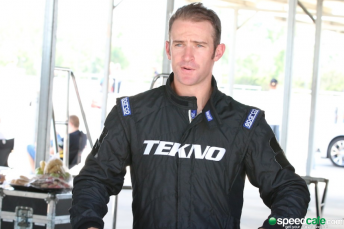 “It was not ideal to miss the morning,” Davison told Speedcafe.com.

“We spent the early afternoon doing what should have been done in the morning getting comfortable in the car.

“We had an awesome afternoon and we got a heap done. I was never concerned.

“I knew the car was going to be good. I feel comfortable in the car and that I can go hard out the gate at Adelaide.

“I like what I feel. It has got strengths and weaknesses but you can tell the car going to be a good thing.

“I’m not going to come out and say I’m going to win this year’s championship but the potential is there, the car is there.

“The engine is so nice it is just Christmas every lap. The shifts are so crisp and the driveability off the corners is so smooth and nice.

“I’m happy. The first race with a new team you are never going to be 100 percent ready but I feel good going into Clipsal.

“We have got a lot more to learn together and lot more stuff to try as a team. But it is good to know that the base package is there or thereabouts.”

Davison trialled new components on the Commodore throughout the day confirming that the team has committed to upgrades for the new season.

“We have already committed to some upgrades and until we receive those we are running something in the middle, which is what they finished last year with,” added Davison.

“We were running a different upright to what they (Tekno) finished the year with but not quite what they’ve (Triple Eight) got, but we will have that soon.”

Davison’s car ran devoid of branding at the test but team owner Jonathon Webb says the team has secured a title sponsor which will be revealed soon.

“It has obviously been a busy off-season, we had a lot of things going on with the introduction of the GT program,” Webb told Speedcafe.com.

“It has just added to our workload, but we are looking forward to what we will release going into Clipsal.

“For the test we had a white truck and black car which looked cool so we will leave the surprises for another week.

“We have something lined up and we will do a launch for our V8 and GT programs in the next week or so.”

Next Story Coulthard 'under no illusions' amid building phase