Chilton was recently announced as the fourth driver in the powerful Chip Ganassi line-up.

A member of the ill-fated Nissan NISMO GT-R LM program last year and with 35 Formula 1 starts under his belt, Chilton gives a comprehensive insight into his move to America’s top single-seater class.

QUESTION: Max, it’s been a busy February for you from your announcement with your drive with Ganassi to last week testing your car for the first time.

After testing at Sonoma and the oval at Auto Club Speedway (Fontana), what are your impressions of racing an IndyCar?

Sonoma was where I drove the car for the first time. It made it a little bit difficult, I didn’t know the circuit that well. Most of you on the call know, Sonoma is one of the trickiest circuits on the calendar.

The test went well. I got up to speed pretty quickly.

In the afternoon we concentrated on not doing a full race distance but we did fuel stints, you know, 25 laps at a time.

It was good to sort of see how the tyres wore down throughout the run.

It’s very much what I’m used to in F1. The tyre deg is pretty high, but it’s manageable as long as you drive sensibly, control the wheel spin, you can find ways of extending the life of the tyre. So it was a really, really good day.

That’s why they’re the most used single seater tub in the world. Q: For a rookie to join a team like Chip Ganassi Racing, it’s a huge opportunity for any driver. What is it like to work with one of the biggest and most recognised teams in IndyCar?

CHILTON: It’s an amazing experience. I have to thank everyone at Chip Ganassi, including Chip, for giving me the opportunity.

I am a rookie. I know I’ve had experience in one of the highest categories in the world, but they’re still taking a risk with me as I’m new to all of the ovals but a couple, and also a lot of the street circuits.

I did eight rounds of the Indy Lights Series last year, or maybe a bit less, so I’ve learnt some of the circuits. But there are still quite a few that I don’t know.

It’s going to be a steep learning curve. They’ve obviously seen the talent I’ve got.

I think it was after Iowa, when I won only my second experience on the ovals, that they realised there was something there.

That’s when they called us, as well as many of the other teams.

It’s great to be with such a great team. They haven’t got the #1 history in the IndyCar championship because Penske has more titles.

But if you look into it, Penske has been in it another 25 years longer and only won another couple of titles. In a short period of time, Chip is by far the best team on the grid.

It’s great to start with a team where I’ve got the best opportunity.

I’ve been in a car the last few years, especially in F1, where you can have the race of your life, and you’d still finish in middle to the back of the pack.

Q: Max, could you elaborate a little bit more on the team dynamic of working with a champion driver like Scott Dixon and Tony Kanaan, as well?

If you could, elaborate a little bit more on your oval test at Fontana, talk about what else you think you need to learn on the ovals?

CHILTON: You know, there’s endless things that I can learn.

Scott and Tony have both been in IndyCar for, say, 14 years for argument’s sake. They’re still learning. I never stop learning.

But I am in the best place. It’s hard for me to say because I’ve only done Sonoma and Fontana, and Fontana was just me.

Okay, TK (Kanaan) got in the car and did a few laps in the morning.

I’ve only basically done one day in the car with other drivers and my team-mates testing at the same time.

From my experiences, they were very open.

Everyone can share the data. Between all the stands, the engineers are talking to each other throughout the session. TK didn’t like this, don’t bother trying that.

So instead of having four cars going out and finding information or data, basically like a street circuit or where we haven’t been, for example, like Boston, we’ll be able to get to the setup technically four times faster than someone else.

Okay, each driver has their preference, but we’ll be able to progress very quickly with four of us. Two of them have fantastic stints.

Charlie (Kimball) has been in it for six or seven years, and he’s a race winner as well. I’m in the ideal situation. So very fortunate to have that.

Fontana, the test, it was sort of a faultless day.

There was zero wind all day. Lovely. It was nice and warm, clear skies. TK got in the car and did an out and in lap, then an eight-lap run.

He was flat out pretty quickly. I stood up in the stands with Dario Franchitti and a spotter just watching how it seemed.

Fontana’s got five different sort of lanes. It was just keeping an eye on what lane he was staying on throughout the lap. So I learnt that way.

Then I got in the car. In the first run, ovals, I don’t think you can ever really feel comfortable on an oval.

I know I got comfortable quite quickly. I’m sure that changes with other cars around you, especially at Fontana with the seams.

I’m sure when you have to dip down halfway through a corner with other cars around it becomes a lot more daunting.

It was a good way for me to learn without other cars around and just built up to it as the day went down. Took back the downforce. It was a fantastic test.

Phoenix in a couple weeks is going to be a completely different experience because it’s a short oval. There’s going to be plenty of other cars around. I will have to learn a lot that day.

But as oval speedway first days go, it was a good day. I’m very thankful for TK and Dario to come down and give some help. 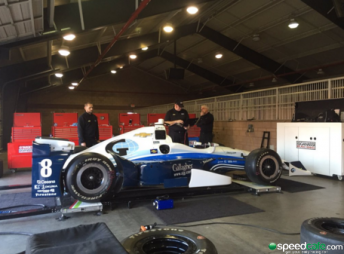 Q: Have you spoken to Chip about the potential of Le Mans in the Ford GT?

CHILTON: Not directly. I think they know I’m a big fan of LMP1 racing, where I went after Formula One, and I’d done it before F1 as well.

I would look at it. Personally I don’t really fancy GTs yet because I still feel I’m at an age where I can do well and I can prove myself more in single-seater racing and get victories, maybe championships under my belt, before I jump into a GT car.

I’d probably rather go LMP1 before I did that.

The one thing that Chip has is a world rallycross team (US-based Global Rallycross), and I would absolutely jump at a chance to have a go at one of those.

People like Scott Speed have gone across and done very well in that.

It seems to be where some drivers have gone and done well. It just seems a fun, new sport. If I got offered a little job in that, I’d definitely have a little play.

Q: If you wanted to tell Bernie (Ecclestone) or the strategy group in Formula One what they need to do to make the sport better on that side of the Atlantic, what would you tell them?

CHILTON: What would I say? Cheapen the prices of a ticket entry. Don’t scare away the young fans.
I think Bernie was quoted as saying his target audience are wealthy pensioners.

That’s what IndyCar does. Ticket prices are a fraction of what F1 tickets are.

Easier to sell things to sponsors saying they’ve got this attendance at a race. With more people being there, it makes it easier.

They’re definitely advanced in certain areas. But it’s a way up between the two.

Yeah, I think IndyCar’s definitely easier for spectators to get involved.

It’s easier to get around the paddocks than Formula One. Formula One is very restricted.

I do think IndyCar needs to try and get some foreign races, but from what I’ve heard they’re already looking strongly at that for the next couple years.