A Mercedes-Benz A45 hyper hatch is in the final phases of build ahead of the Hi-Tec Oils Bathurst 6 Hour enduro as part of the Easter weekend Motor Festival.

Experienced racer Ron Searle and Garth Walden will contest the 50-plus car field in an Mercedes-Benz AMG A45 against the tried and tested outright fighters from Mitsubishi, Subaru and BMW in the race from March 25-27.

Purchased by Searle, the hatch is in the final stages of construction at the Sydney facility of Walden.

It is understood the turbo-charged four cylinder all-wheel-drive Mercedes will be ready for an initial shakedown test next week.

“Ron and I decided we’d like to run this event and take on the EVOs for outright honours,” Walden explained.

“As Ron is a Mercedes enthusiast and collector we went looking at the A45. I did a lot of research on the car and it came up strong in every department.”

Walden tested the road-going version of the car late last year at Sydney Motorsport Park and said the numbers stacked up on-track.

“It was really great at the test, considering it was still a road-going car, but it had heaps of power and we were stoked how good the numbers were,” he said.

“It wasn’t far off pole position for the AMChamp round at the same track. Its 120kg lighter than the Mitsubishi’s as well, which should help.

“The car was in the paint shop over Christmas and we’ll be ready to test by the end of February.” 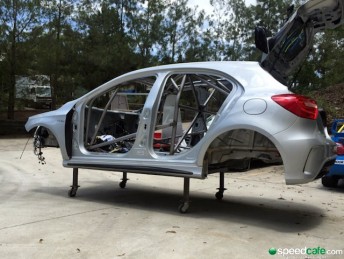 The Searle/Walden combination worked together in the early 2000s building and running a VS Holden Commodore in the V8 Supercars Development Series.

Walden is no stranger to Mount Panorama with starts in the Bathurst 1000 and Bathurst 12 Hour races to his credit.

Driving with his father Brian Walden and Michael Auld, he won his class in the around-the-clock enduro in both 2008 and 2009.

The A45 AMG will be entered in the A1 class for high performance cars with forced induction (turbocharged or supercharged) which is where a majority of the key 6-hour contenders are likely to be entered.

More than 20 entries have been received in the A1 and A2 (high performance, normally aspirated) classes while the current overall entry list stands at more than 50 cars.

Entries close tomorrow (February 19) ahead of the race on March 25-27.