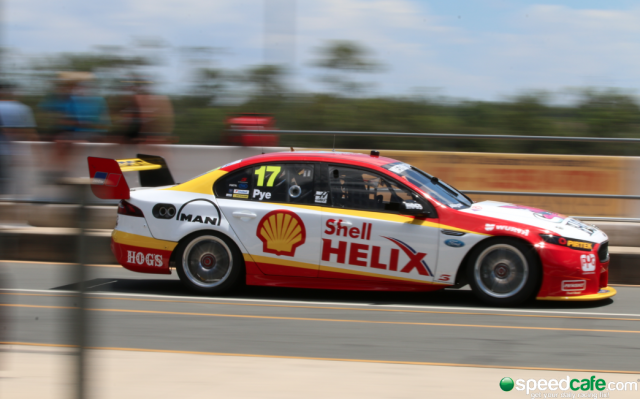 Scott Pye emerged fastest with a best time of 1:09.08s set while on new soft tyres just six minutes before the chequered flag fell on the four and a half hour long afternoon session.

Lowndes’ 1:09.47s best remained good enough for third fastest in the afternoon, despite being narrowly slower than team-mate Jamie Whincup had managed in the morning.

The pace of the DJR Team Penske Fords came at the end of the squad’s first day since expanding to a two-car operation, welcoming Coulthard and new race engineers Adam De Borre and Phil Keed.

“I was really happy with our pace on both the hard and the soft tyres,” Pye told Speedcafe.com.

“We made some really positive changes throughout the day, which was a great start for myself and Adam working together.

“We didn’t get caught up trying anything drastic. We just stuck to the program and when we put on good tyres I was comfortable that I knew what the package was.”

Shane van Gisbergen was fourth, having topped the sheets prior to Lowndes’ time being put down with 45 minutes remaining.

Neither of the Triple Eight drivers improved during the final minutes when the Penske Fords ran their best rubber.

Will Davison managed a session high 66 laps in the afternoon on his way to fifth, having run just 17 in the morning while the Tekno team sorted issues with the differential of its Holden.

Whincup ended up behind the top Dunlop Series runner Todd Hazelwood in seventh, having briefly had Lowndes steer his Red Bull entry while the team diagnosed a vibration.

Sweltering conditions at the Ipswich venue made it a tough return to track action for the V8 Supercars crews.

A mechanic on Lowndes’ Holden was taken to the local hospital by ambulance in the early afternoon due to the affects of the heat.

Despite the heat, teams were forced to wait out a brief rain shower late in the going before the track dried for the final hour.

Teams practiced pitstops for an hour during the middle of the day, running the circuit in an anti-clockwise direction in order to simulate the pitlane layout seen at the season opening Clipsal 500 Adelaide.

Note: Pye set the fastest time in #17 before D’Alberto finished the session