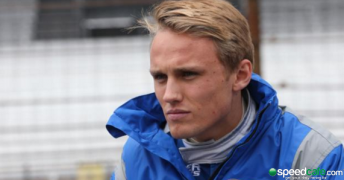 British driver Max Chilton has been left wide-eyed at the amount of downforce an IndyCar generates following his rookie tests at Sonoma and the super speedway at Fontana.

Chilton has gained valuable experience from the tests in the #8 Chip Ganassi Chevrolet he will campaign this year with the defending Verizon IndyCar Series champion team.

After running in a handful of Indy Lights races last year for Carlin which netted a surprise win at Iowa, Chilton has now experienced the road course and super speedway aero kit configurations following tests at Sonoma and the Auto Club Speedway.

“I knew they always had an amazing amount of downforce,” Chilton told IndyCar of the Sonoma experience.

“I got up to speed pretty quickly. In the afternoon, we concentrated on not doing a full race distance but we did fuel stints, you know, 25 laps at a time.

“It was good to sort of see how the tyres wore down throughout the run.

“It’s very much what I’m used to in F1. The tyre degradation is pretty high, but it’s manageable as long as you drive sensibly, control the wheel spin, you can find ways of extending the life of the tyre.”

Chilton spent some time with former Ganassi driver and team advisor Dario Franchitti and a team spotter in the grandstands at Fontana, absorbing the advice on how to tackle the D-shaped speedway.

“In the first run, ovals, I don’t think you can ever really feel comfortable on an oval,” Chilton said of the Fontana test.

“I know I got comfortable quite quickly. I’m sure that changes with other cars around you, especially at Fontana with the seams.

“I’m sure when you have to dip down halfway through a corner with other cars around, it becomes a lot more daunting.

“It was a good way for me to learn without other cars around and just built up to it as the day went down.”

Chilton said he was eternally grateful at being given an opportunity to drive his rookie season in IndyCar with a top outfit like Ganassi.

“I am a rookie. I know I’ve had experience in one of the highest categories in the world, but they’re (Ganassi) still taking a risk with me as I’m new to all of the ovals but a couple and also a lot of the street circuits.”