BJR is shaking down its two new chassis at the rural circuit ahead of Monday’s test at the venue for all Victorian-based teams.

Winton has undergone major changes since the V8 Supercars last visited the circuit, including a full resurface that took place last month. 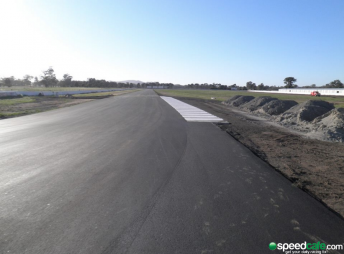 The exit of Turn 10, pictured earlier this month

Other changes have seen Turns 10 and 12, the final left and right handers respectively, re-profiled, with the latter expected to yield a marginally faster run onto the front straight.

Slade says he’s eager to assess the changes, but stresses that the brief shakedown run is unlikely to provide much of a head start over BJR’s rivals.

“I’ve tried to scour around and see some pictures of what it looks like,” Slade told Speedcafe.com.

“They’ve done more than what I thought with some re-profiling of a couple of corners, so it’ll be interesting to get a preview of that.

“Given that it’s such a new surface I don’t expect it will be too good tomorrow, just due to the nature of new surfaces.

“But come halfway through Monday it should be reasonable.”

The laps will be Slade’s first as a BJR driver, where he replaces Fabian Coulthard following two years at Walkinshaw Racing. “I’ve had a few visits down to the workshop and have been loving it so far,” said Slade of his new team.

“Brad and Kim (Jones) are awesome to get along with. They’ve got a good bunch of guys here.

“I thought I’d have a lot more laps under my belt before the first test because of what happened at the Bathurst 12 Hour (where Warren Luff crashed the McLaren Slade was due to share).

“It’s made me even more excited and eager to jump in my own car to do some laps tomorrow and next week.

“The guys have done such a good job with the car it almost feels too good to take it onto the track and get it dirty.”

BJR is the latest team to shake down a new car over the past fortnight, with DJR Team Penske and Triple Eight breaking in new machinery at Queensland Raceway and Nissan Motorsport and Holden Racing Team running at Calder.

Prodrive Racing Australia has elected against a separate shakedown for its new car, which the returning Chaz Mostert will run for the first time on Monday.

DJRTP, Triple Eight and Tekno Autosports are all on track at Queensland Raceway today, undertaking their full test day ahead of the Clipsal 500 on March 3-6.