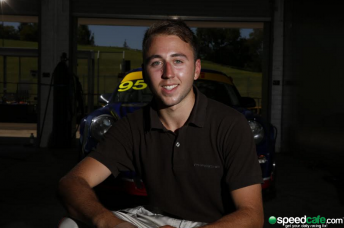 West Australian Jake Klarich has been named as the first recipient of Porsche’s Jamey Blaikie Scholarship.

The 20-year-old announced last year that he would step up from karts to the GT3 Cup Challenge with McElrea Racing.

Porsche’s new-for-2016 junior scholarship will provide Klarich with Pirelli tyres for the season, as well as a Freem race suit and driver apparel, free entry to the series, media and fitness training and a mentorship program.

“The calibre of applicants was second-to-none; we went to great lengths to review every application and interviewed every driver on our shortlist,” said Porsche Cars Australia motorsport manager, Kurt Sakzewski.

“Upon lengthy consideration, we found Jake to be an outstanding young man and have the greatest potential as the recipient of the Scholarship to move up the Porsche Motorsport Pyramid. “Jake has impressed with his ability in karting and we look forward to nurturing his talent in a Porsche race car.

“He also brings the right attitude to the program, which shined through in his interview, along with his exceptional ability to communicate.

“We look forward to seeing him continue to develop as a driver as the season progresses.”

Klarich says he’s honoured to be awarded the scholarship, which is named after the late Porsche Cars Australia motorsport manager Jamey Blaikie.

“I’m absolutely thrilled to receive the Jamey Blaikie Scholarship and be the very first Porsche Junior in Australia. It’s an honour and truly exciting to be part of this programme,” he said.

“To be aligned with Porsche at such an early stage in my career is amazing.

“The brand has such a strong presence in motorsport both in Australia and globally and I look forward to climbing the Porsche Motorsport Pyramid, starting with GT3 Cup Challenge this season.

“GT3 Cup Challenge is a great first step out of karting and lays the foundation for Carrera Cup, which is where I hope to go next. I’ll do all I can to be in that championship in the future in the hope for a professional motor racing career.

“I’d like to thank Porsche Cars Australia for the opportunity and I look forward to starting the season with the brand.”