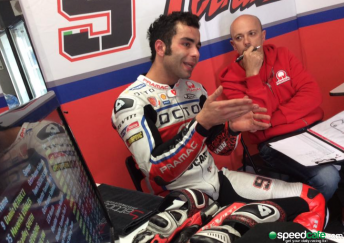 Pramac Ducati’s Danilo Petrucci topped the times on a interrupted opening day of the MotoGP test at Phillip Island.

The Italian clocked his session best in the final two hours of the hit-out during a brief dry period at the Victorian circuit as intermittent showers disrupted teams’ plans for much of the day.

Instead the paddock spent the day learning how the new-for-2016 Michelin tyres and electronics react in the damp conditions.

Equipped with slicks, Petrucci’s best of 1:31.764s proved to be 0.7s quicker than the factory Suzuki of Maverick Vinales, while Tech 3 Yamaha’s Bradley Smith was third fastest just 0.1s further back.

Britain’s Scott Redding also made the most of the limited dry window to post the fourth fastest time on the sister Pramac Ducati machine.

LCR Honda’s Cal Crutchlow was fifth quickest ahead of the first of last year’s championship contenders Valentino Rossi, who was more than second adrift of the pace.

Rossi tested his 2016 machine with a new fuel tank, while his Yamaha team-mate and reigning world champion Jorge Lorenzo ended the day in 16th, having completed just 22 laps in the wet conditions.

The inclement weather reduced Jack Miller’s running to just six laps on his return to action after sustaining a broken right leg in a training accident.

Aboard 2016 evolution machines, the factory Honda riders of Marc Marquez and Dani Pedrosa were 12th and 17th respectively.