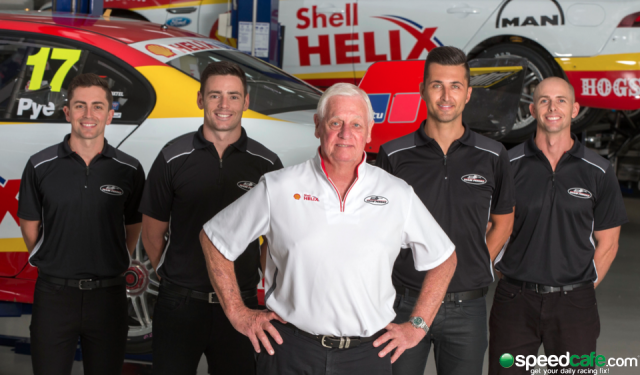 Dick Johnson with his four drivers

DJR Team Penske has confirmed the signing of Luke Youlden and Tony D’Alberto for this year’s Pirtek Enduro Cup.

Youlden has followed Fabian Coulthard across from Brad Jones Racing to continue their partnership at the Ford squad.

Scott Pye will meanwhile be joined by D’Alberto, who had spent the last two Pirtek Enduro Cup seasons alongside Tim Slade at Walkinshaw Racing.

The duo has been signed following Marcos Ambrose’s decision to step away from his co-driving role with the team this season.

“I was hoping that my association with Fabian would continue when he announced his move to DJR Team Penske and I am thrilled that it has come together,” said Youlden.

“We work very well together and having Phil (Keed) as our engineer is a huge bonus.

“To drive for this team is a real highlight of my career. Dick Johnson and Roger Penske are such huge names in motorsport so to represent them on track is very special.”

“I am really pleased to join DJR Team Penske and partner up with Scotty for the enduro races,” he said.

“I think the team did a great job last year and they were starting to look strong when it mattered late in the season.

“Scotty and I get on very well and I can’t wait to get behind the wheel of car #17 and support the team at the test day tomorrow.”

Pye and D’Alberto were scheduled to pair up in Maranello Motorsport’s Ferrari at the recent Bathurst 12 Hour before an FIA seeding change ruled out the former in the lead-up to the race.