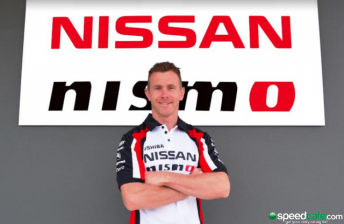 Dale Wood has officially kicked off his duties as a factory Nissan V8 Supercars driver with a shakedown of a new Altima at Calder Park.

Sharing the track with the Holden Racing Team and its new car for James Courtney, the shakedown took place in cool but dry conditions.

The Nissan was presented in plain white, with a full reveal of the sponsor that will replace Jack Daniel’s as the #15 entry’s major backer not expected until after Monday’s running.

Wood says he was pleased with the way he adapted to the Altima, which has a unique cabin layout among the V8 Supercars field.

“I was surprised how quickly I became comfortable with the driver positioning because it’s quite different to what I’ve driven before,” Wood told Speedcafe.com.

“You feel like you’re sitting over the rear wheels, but it’s all just a perception thing with the way the body is positioned on the chassis.

“The dash feels like it’s a long way away and the screen seems quite far over. But it didn’t take long to feel comfortable.

“The boys put the effort into putting the seat into my position which helped. We learnt a couple of things that we can now apply to my car.”

While Kelly’s car is new, Wood will campaign the chassis that has sat unraced since Michael Caruso’s crash at last year’s Clipsal 500.

Although only completing limited laps on old tyres during the shakedown, the running provided Wood with a valuable preview of the Nissan’s characteristics ahead of Monday.

“I’m really happy that I can go to Winton now having driven the car,” he said.

“There were some particular traits that, whether it be the BJR cars or the Holdens in general, I struggled to really get my head around compared to someone like Fabs (former team-mate Fabian Coulthard).

“Driving the Nissan, straight away you could tell there were no hints of those traits at all, which I think is about the combination of the way the cars are built and the aero package.

“I’m sure there’ll be different things to tackle with this car, but it’s nice for me to know that I haven’t got those things to deal with.”

Wood has meanwhile focussed on improving his own performance behind the wheel over the off-season, spending time with a driver coach in the United Kingdom.

The 32-year-old says that the program was a worthwhile experience as he strives to make the most of the chance with Nissan.

Wood took 20th and 24th placed season finishes during his two seasons with BJR, scoring a single podium at Winton in 2014.

“One of the engineers at Nissan teed it up and planned it out,” he explained of the coaching.

“I went there not knowing what I was in for and had some questions about it, but I enjoyed it and came away thinking it was really beneficial.

“There were a lot of parts of my driving last year I was really happy with and other parts that I wasn’t happy with.

“I still feel I needed to find more consistency and outright qualifying pace.

“Hopefully they come throughout this year working with this team.”

Wood had been scheduled to drive with M Motorsport in the recent Bathurst 12 Hour, but did not turn a lap in the race after a practice crash for co-driver John McIntyre saw the Lamborghini withdrawn.