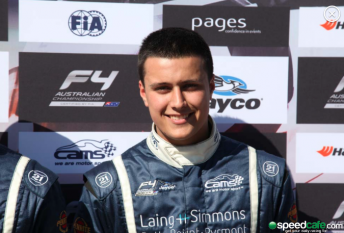 The 17-year-old from Sydney will join the Jamun Racing outfit for the 30 race series which runs on the undercard of the British Touring Car Championship schedule.

The teenager finished fourth in the championship standings scoring four podiums from the 21 races.

Hayek will join fellow Australian F4 graduates Luis Leeds and Zane Goddard in MSA Formula this year as he aims to hone his single-seater racing skills against Britain’s best.

He will also supplement his time working as a mechanic at the Jamun Racing squad over the next seven months.

“The biggest challenge will be going over to the UK and living by myself,” Hayek told Speedcafe.com.

“I’m living the dream. I’m very lucky and fortunate to have this opportunity. It is going to be a bit of a life lesson.

“The ultimate goal is to win the championship.

“In regards to the car we learnt a lot about set-up last year and it was great to have a season with a top team like Team BRM and take that with me to England. It is definitely an advantage.”

The MSA Formula season begins at Brands Hatch from April 2-3.