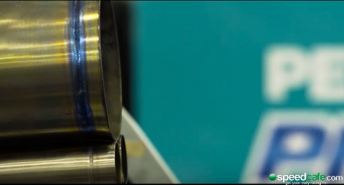 Mercedes has released a teaser video of a new exhaust system aimed to increase the volume of its Formula 1 cars this season.

The FIA has introduced new exhaust regulations for the 2016 season which stipulate that all cars must be fitted with separate tailpipes for the turbine and the wastegate.

The move comes following widespread criticism of the lack of noise generated from the 1.6 litre turbo charged F1 engines introduced in 2014.

The video shows Mercedes’ interpretation of the latest version of the sport’s technical regulations regarding exhaust systems, offering a brief soundbite of the car on fire up.

“Engine exhaust systems must have only a single turbine tailpipe exit and either one or two wastegate tailpipe exits which must all be rearward facing and through which all exhaust gases must pass,” reads Article 5.8.2 of the technical regulations.

While Mercedes is yet to confirm a launch date for its new car, arch rival Ferrari has announced it will reveal its new 2016 challenger on Friday prior to next week’s pre-season test at Barcelona’s Circuit de Catalunya.

The Maranello team will release images of its codenamed 667 machine via the squad’s website.