Whincup subs for Lowndes at shakedown 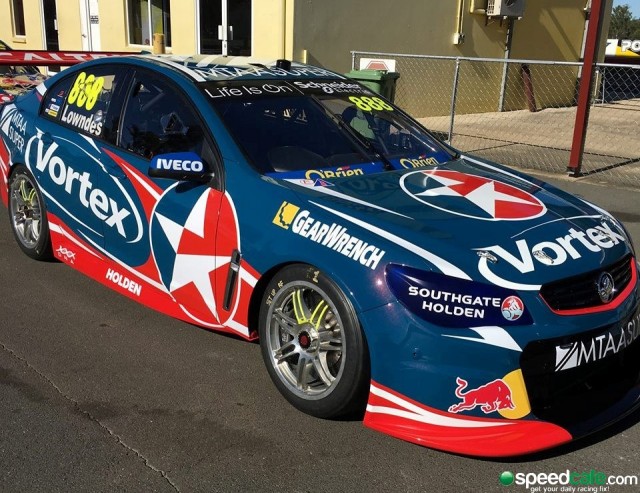 Whincup will turn the first laps in Lowndes’ new Holden

Craig Lowndes’ new TeamVortex Holden will have its first run at Queensland Raceway today with Jamie Whincup at the wheel.

The shakedown was set to see Lowndes make his track return for the first time since breaking his collarbone in a motorcycle accident last month.

The team has however confirmed this morning that medical advice will see the 41-year-old sit out the 60km shakedown before joining the squad’s full test day on Thursday.

Whincup and Shane van Gisbergen will both be on track, with the team’s new recruit bedding in his own brand new chassis.

Lowndes missed the recent Bathurst 12 Hour as a result of his injury and has maintained that his full focus is on being fully prepared for the Clipsal 500 on March 3-6.

“It’s about focussing on Clipsal to make sure we’re right for that,” Lowndes explained at the recent TeamVortex launch.

“We know the Clipsal street circuit is quite a demanding circuit on the body as well as the mind.”

Lowndes is at the Ipswich circuit observing proceedings on a day that marks the track debut of his new Caltex Vortex colours.

The day will meanwhile provide Van Gisbergen with his first taste of a Red Bull specification Triple Eight Holden, having spent the last three seasons in customer equipment at Tekno.

“It’ll be interesting to see what the cars are like and how it makes its speed,” Van Gisbergen told Speedcafe.com ahead of the shakedown.

“There’s been a few little separate set-up differences between the cars over the last year or so.

“Whether they were driver differences or just the way the teams did the prep I’m not sure. All of that stuff will play out, I’ll get a feel for it and go from there.

“It’ll be all about getting as comfortable and involved in the team as I can before Clipsal comes around so we can get straight into it at the first race.”

Van Gisbergen says he’s spent considerable time in the Triple Eight workshop in the lead-up to the season, working with engineer Grant McPherson and the team.

Although familiar with many of the staff due to Tekno’s technical partnership with Triple Eight, the Kiwi says that going from the smallest team in pitlane to one of the biggest is an eye-opener.

“For me it’s like going back to Stone Brothers,” he said.

“Everything is in-house, all the people are there. It’s a big family under one roof. It’s cool to go back into a big team like that.

“When you look around the shop and see how everything is laid out and set up, you can see why they’ve been so successful.

“It’s a very impressive team and it’s really exciting to be a part of.”

Triple Eight has assigned its technical director Ludo Lacroix to Lowndes’ car for the season, while Whincup will continue to work with David Cauchi.

Whincup is the only one of the three drivers not to start the season with a new car having debuted his current chassis at Sandown last September.

Next Story Lowndes: Injury recovery is on target