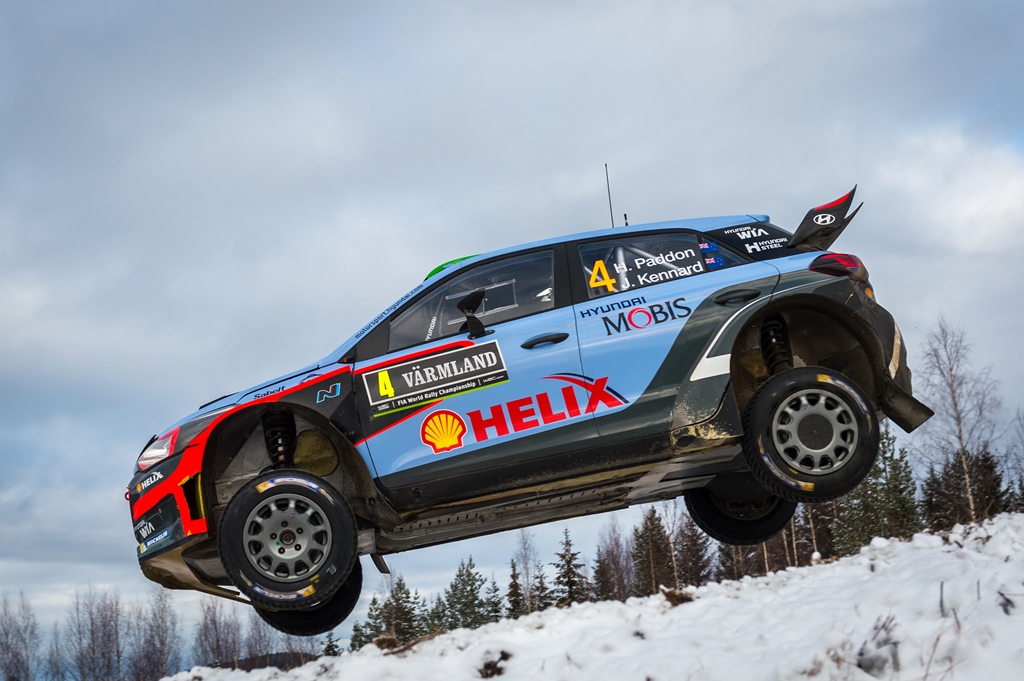 New Zealander Hayden Paddon has made World Rally Championship history by becoming the first non-European driver to finish Rally Sweden on the podium, after his second place finish behind world champion Sebastien Ogier.

Paddon is now one of only seven non-Scandinavian drivers to have finished second on the famed all snow and ice event.

The Hyundai factor driver held second place at the end of the opening leg. Through the following two days of competition Paddon maintained his position, although the final stage did bring some late drama.

Paddon and co-driver John Kennard successfully completed the only special stage early Sunday afternoon (European time), but crossed the stage finish line with a water leak from the radiator after hitting a wooden post during the stage.

The duo swiftly carried out repairs before nursing their car back to service – a necessary requirement to complete the rally.

“A podium is a fantastic result for me and everyone in the team,” said Paddon.

“We were hoping to have had a less stressful finish to the rally but unfortunately we had some water leaking from the radiator after hitting a wooden post in the stage, which required some quick repairs. Thankfully, we were able to find a temporary fix and get back to service with our second place intact!

The result moves Paddon into fourth equal on the WRC drivers’ championship points-table and also marks the second consecutive podium finish for the New Generation Hyundai i20 WRC car to score 18 important manufacturer points for the team, who are now just five points off leaders Volkswagen Motorsport.

“Late drama aside, we have had a good weekend and I have felt very comfortable in the New Generation i20 WRC,” said Paddon.

“We made the most of our road position when we had to, and refused to get drawn into a fight for the lead. In the future, we will fight more for the win but there’s a bit more work needed on my driving and on the car set-up. We’re not far away and, for now, we’ll happily take second place.”

Out front, Ogier claimed full points after winning the rally outright and also the final Power Stage to start the 14 round season with his second-straight win after his victory at Rallye Monte Carlo.

“Two wins from the first two rallies, it can’t get any better,” said Ogier.

“Yesterday was a little bit too crazy and I took risks like I had never done in my life.”

The WRC heads to gravel for the first time next month when León hosts Rally Mexico on 3 – 6 March.