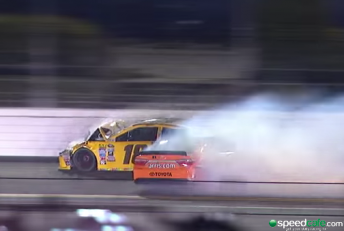 In a wild start to the long NASCAR year just 12 of the 15 cars to make it to the end of 79 laps were classified on the lead lap.

The first of the incidents saw Tony Stewart’s stand-in Brian Vickers cause a six-car wreck on lap 23 after a tyre failure.

In the closing laps, an error of judgement from Carl Edwards took out Brad Keselowski and Kyle Busch.

Then under the ‘overtime’ rules, Matt Kenseth sparked a further six-car wreck as teams face a tough start ahead of the season-opening Daytona 500 next weekend.