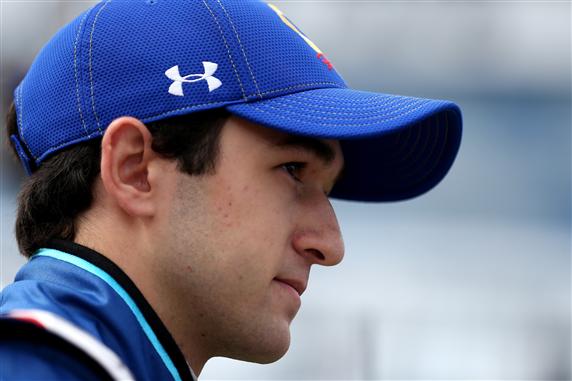 Chase Elliott is on his way to emulating his famous father

Chase Elliott has quickly showed he was the right choice to replace the retired Jeff Gordon by becoming the youngest ever pole winner for the famed Daytona 500.

The son of NASCAR Hall of Famer Bill Elliott, the 20-year-old took the No. 24 Hendrick Motorsports Chevrolet to the top spot in the second round of qualifying to back-up Gordon’s effort from last year.

Bill Elliott took three pole positions in the Daytona 500, with Chase setting an impressive lap of 315.9367km/h (196.314MPH) around the 2.5-mile superspeedway to share the front row with Matt Kenseth.

“This is a very, very cool day,” said Elliott.

“I don’t know that this opportunity has sunk in yet, much less sitting on the pole for the Daytona 500. I think the big thing is just the team and the Daytona 500 qualifying is about the team guys and the effort they put into these cars and it’s nothing special I did, it’s really what kind of work they did this off-season to make it happen.”

Although today’s qualifying has been run, only the front row is set with a total of 44 cars fighting for the 40 starting spots.

Positions 3-40 will be determined in Thursday night’s Can-Am Duel qualifying races at Daytona.

In the 40-car field, the 36 teams with NASCAR Charters are all guaranteed starting spots. There are eight non-charter teams or “Open” entries.

Among the Open drivers, Ryan Blaney and Matt DiBenedetto were fastest in qualifying on Sunday, which guarantees them starting spots in the Daytona 500.

Blaney is driving for the Wood Brothers; the oldest team in NASCAR. The Wood Brothers were not offered a Charter by NASCAR, as they have not raced fulltime in recent years. Despite a fulltime commitment in 2016 from the team, Blaney will need to qualify on speed throughout the season.

The highest finishing Open team in each Can-Am Duel race will also make the 500 field. In each of the Can-Am Duels, the fields will consist of 18 Charter teams and four Open teams.

Drivers with work to do in those races will be Kevin Harvick, Brian Vickers and Martin Truex Jr. The Stewart-Haas duo of Harvick and Vickers did not have their respective track bars in compliance with the Sprint Cup Series Rule Book, according to NASCAR officials.

The qualifying times for both cars were disallowed, and both will start their respective Can-Am Duel races from the rear of the field.

Additionally, NASCAR ruled that the roof flaps on the No. 78 Toyota of Martin Truex Jr. was not in compliance with the prescribed specifications of the rule book. The No. 78 did not qualify and will also start its duel race from the rear of the field.

VIDEO: Chase Elliott speaks after scoring pole for the Dayton 500

Next Story Crash-fest for NASCAR’S 2016 return