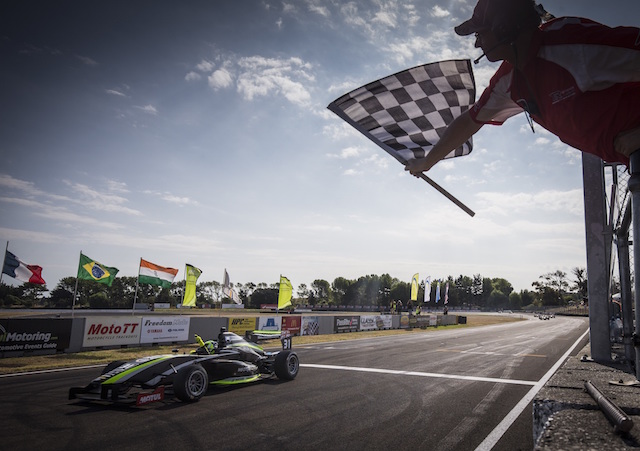 Norris added the TRS to his growing list of achievements, sealing the title in the middle race.

The World Karting and MSA Formula champion then iced his signature TRS season by brilliantly controlling the 35-lap Grand Prix from pole position.

“I’m surprised I did as well as I did,” Norris said, who admitted the Grand Prix was the longest race he has ever competed in. “It’s been a great five weeks.”

There was drama in the closing stages as Pedro Piquet stormed into second position but was judged to have passed under double yellow flags at the final corner.

Norris, 16, was the class act of the 15-race TRS season which uniquely runs across five consecutive weekends.

The TRS has become the launching pad for young open-wheel drivers to start their respective seasons in bigger series including the European Formula 3 Championship.

He has emulated Kiwis Mitch Evans (2011) and Nick Cassidy (2012, 2013) and Canadian Lance Stroll last year to win the big double in recent years.

Earlier Norris finished fourth in the middle heat behind Kiwi Brendon Leitch which ensured he went into the signature Grand Prix with the title in the bag.

In the opening race, Habsburg completed a stunning win after coming from fifth on the grid.

Habsburg beat Christchurch’s James Munro with Norris all but ensuring his title victory by third.